Kenyans will start feeling the heat on Friday after the Energy and Regulatory Commission (ERC) hiked fuel prices in the country.

On Wednesday, the ERC increased fuel prices to up to 13 percent. This has set shivers running down the spines of Kenyans and prices of commodities are set to be adversely affected.

Since the implementation of the Road Maintenance Levy (RML), the Wednesdays increase in fuel prices is the highest so far. The NRL has now been placed at 18 shillings on each litre. By the end of June 2015, the NRL was at 9 shillings before it was hiked by 3 and 6 shillings consecutively making it the largest increase within a period of two years.

The snapshot below shows oil prices in some of the major towns as displayed on the ERC portal: 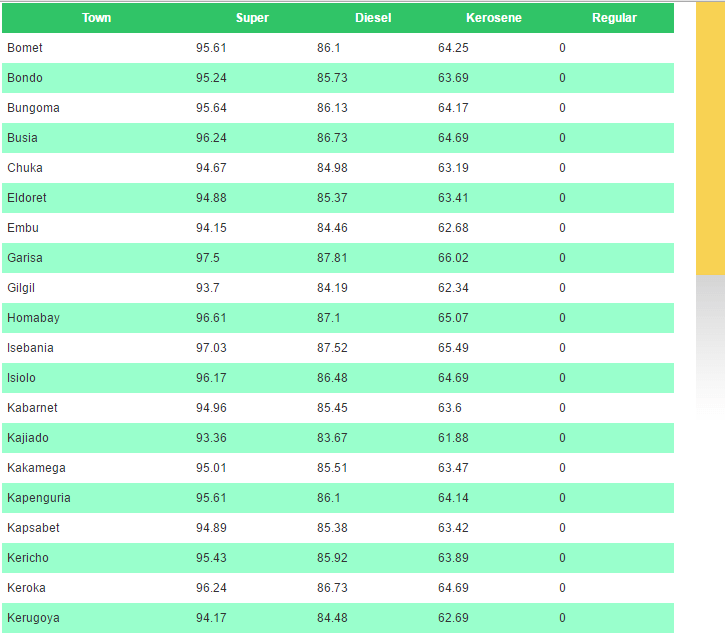 The increase in the prices of diesel is going to affect all the sectors of the economy and every Kenyan is going to feel the heat according to economic analysts.

The transport sector will be the first to feel the heat as Kenyans are going to pay heavily for fare. Already the Matatu Owners Association is considering reviewing transport costs as early as from next week. Most locomotives in Kenya use diesel for fuel. Although Kenyans have not enjoyed the benefits of low diesel prices in the transport sector, the increase will surely have to affect them.

The manufacturing sector will be the next to be hit. Almost all the machinery depend on diesel for operations and Kenyans should brace themselves for high commodity prices from this month onward. Already economic analysts are seeing the manufacturing costs rising by up to one percent, the cost that will be transferred back to the common man on the streets.

The electricity bills are likely to be increased. The country still relies partly on diesel-generated electricity and being one of the most expensive source of electricity, the burden is going to trickle down to the customer.

The National Treasury announced the national budget during the month of June that was in deficit of more than 700 billion shillings and the current move is seen as the government’s desperate ways to fill the tax gabs. Already Kenya Revenue Authority has been failing to meet its targets in revenue collection and the Kenya’s debt both locally and internationally continue to rise.