Kenya Ranked 5th in Ease of Doing Business in Africa

Kenya has been ranked third most reformed country in the world in World Bank Ease of Doing Business index by the Doing Business 2017: Equal Opportunity for All Report.

“Kenya places among the global top 10 improvers. Ranked 92, Kenya implemented reforms in five Doing Business areas. For example, in the area of Resolving Insolvency, the economy introduced a reorganization procedure and introduced regulations for insolvency practitioners. Starting a Business was made easier by removing the stamp duty fees required for the nominal capital, memorandum and articles of association and eliminating requirements to sign the compliance declaration before a commissioner of oaths,” according to the report released on Tuesday.

Mauritius, Rwanda and Botswana lead the park of economies within which conducting business is easy.

South Africa and Kenya follow in that order the reports shows.

In 2015, the country improved 28 positions helped by reforms in business and property registration, electricity connections and access to credit. The country was ranked at position 108 out of 189 countries globally compared to 136 in 2014, making it the third most improved economy.

In contrast to the 2016 National micro, Small and Medium Establishment (MSME) Survey by the Kenya Bureau of Statistics  report released this week, key findings include The survey revealed that the main constraints emanate from regulatory environment characterized by requirement of multiple licenses for the same business.

These licenses are also expensive and cumbersome to get. There is

also interference from authorities; taxes are high and crippling; multiple procedures in applying for business registration that are hectic and restrictive. 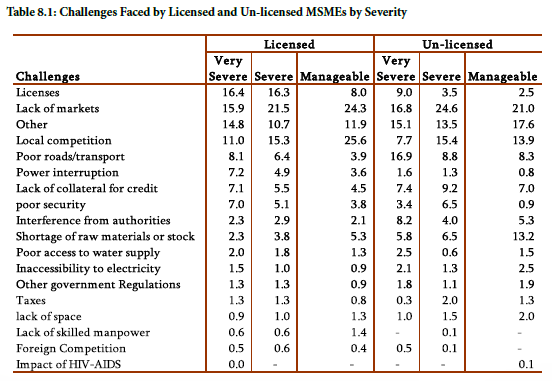 KNBS recommended that the government facilitation for MSME development should therefore include:

The report noted that in 2015, the value of the MSME’s output was estimated at KSh 3,371.7 billion against a national output of KSh 9,971.4. This represents a contribution of 33.8 per cent. In terms of gross value added, the MSME are estimated to have contributed KSh 1,780.0 billion compared to KSh 5,668.2 billion for the whole economy.