Kenya’s inflation rate has maintained its upward trend with November reaching 6.68 percent from 6.47 per cent in October according to the Kenya National Bureau of Statistics. 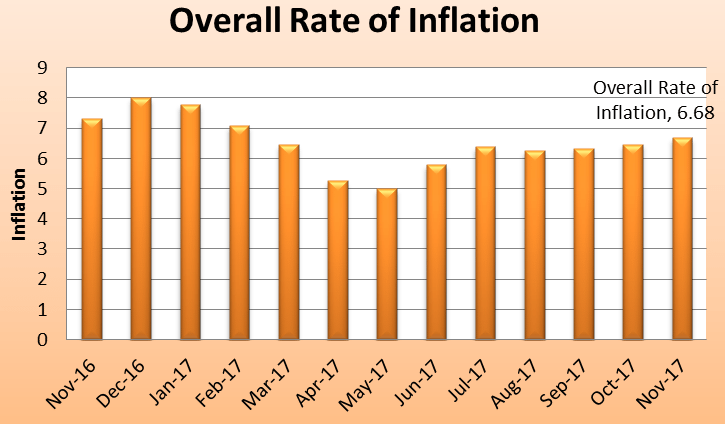 The increase was attributed to the continued rise in food and non-alcoholic drinks index by 1.17 per cent. “This was attributed to increase in prices of several food items which outweighed the decreases of others. The year on year food inflation stood at 11.13 per cent in November 2016.”

Over the same review period, Housing, Water, Electricity, Gas and Other Fuels’ Index, increased by 0.11 per cent. This was partly due to increases in house rents and kerosene which outweighed notable falls in the cost of cooking gas.

The Transport Index increased by 0.55 per cent in November 2016 compared to October 2016 mainly due to increases in the pump prices of petrol and diesel.

On Tuesday, the Central Bank of Kenya said this was a good indicator of the demand pressures that are there.

“It looks like the inflation will remain at that level and will not drop quickly in November. In December, it might ease little more because of the excise tax that was implemented last year. On the whole inflation, it will remain currently where it is and ease towards 5 percent,” projected Dr. Patrick Njoroge the CBK Governor.