Kenya Risks Being Downgraded Due to Swelling Debt

The soaring trend in Kenya’s debt position is ‘concerning and will only add to the country’s rising debt burden currently at 50.3 percent of the Gross Domestic Product (GDP) according to Kenya’s financial Analysts.

“We are already above the IMF recommendation of 50.0 percent of debt to GDP,” according to Cytonn Investments.

“Following the recent Fed rate hike and expected tightening cycle of monetary policy in the US, which is expected to lead to a global strengthening of the dollar, a stronger dollar will make debt repayment expensive for Kenya. This is because with a stronger dollar, we shall owe more shillings for every unit of foreign denominated debt, worsening the debt to GDP situation even further,” they add. 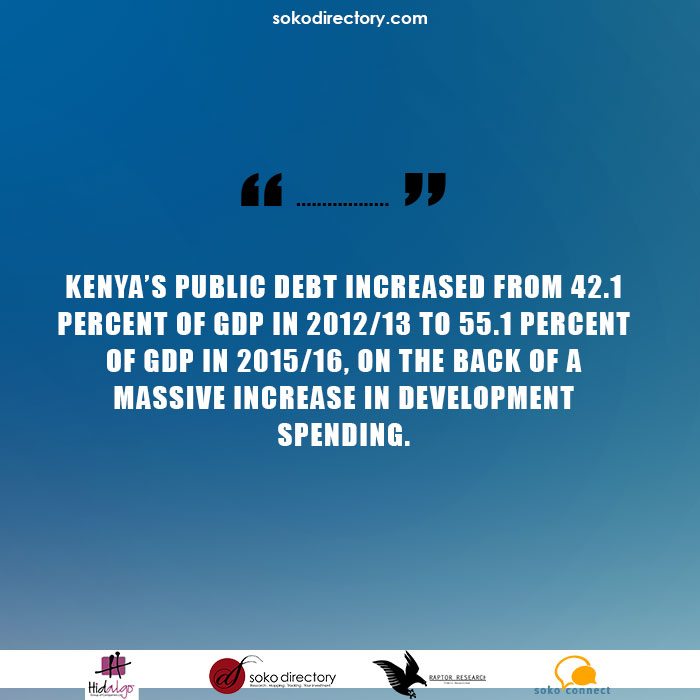 The World bank economic update on Kenya says Kenya’s more than sh3.6 trillion public debt as at September 2016 remains sustainable and the margin for further debt accumulation is narrowing and exposing the country to potentially difficult times ahead.

The International ratings agency Fitch has maintained the country’s rating on foreign and local currency at B+.

However, the two have a projected a negative outlook.

Fitch cites the rising fiscal deficit and public debt. “Kenya’s ratings are supported by its strong growth potential and resilience to shocks, favourable business climate and only moderate exposure to commodity prices. However, its ratings are constrained by its low GDP per capita, sizeable twin budget and current account deficits and rising public and external debt ratios, as well as by political risks,” said Fitch in a statement.

On the other hand, S&P cites Kenya’s history of ethnic tensions, low GDP per capita, high government debt, and susceptibility to balance-of-payments pressures continue to constrain their ratings for the country.

“We could lower the ratings if Kenya’s budget deficits were to increase further or government debt increased more than we currently expect. We could also lower the ratings if political tensions flared up and undermined stability-oriented economic policy making, or if Kenya’s external liquidity or financial conditions markedly deteriorated and led to a significant loss of foreign-exchange reserves and widening of the external financing gap.”

David Ndii is Managing Director of Africa Economics on his Twitter Feed, projects that Kenya risks being downgraded to B if the debt/GDP gets to 7 percent.

“If debt/GDP gets to 57% (which it will) and deficit does not come down (which it won’t) you will be downgraded to B = junk regardless,” he Tweeted.

If debt/GDP gets to 57% (which it will) and deficit does not come down (which it won’t) you will be downgraded to B = junk regardless https://t.co/9X7PZm0I9O

Related: Parliamentary Budget and Appropriation Committee Casts Treasury on the Spot over Reliance on Long-term Debt