Food inflation remained high in December, particularly for tomatoes, sugar, cabbages, kales (sukuma wiki), and maize flour, driven by the prevailing unusually dry weather conditions that the country has been experiencing in the past few months.

According to a report from the Central Bank of Kenya (CBK), food inflation remained elevated at 11.1 percent in the month of December 2016 with tomatoes, oranges, sugar, cabbages and kales contributing to 1.5 percentage points to inflation. Food and electricity prices are expected to remain high in the near term. 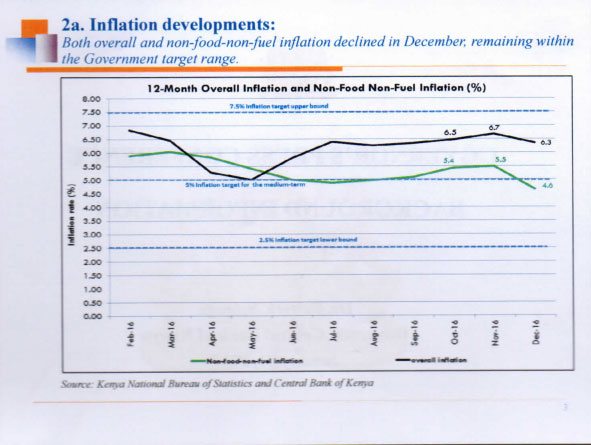 The report further stated that the month-on-month overall inflation declined to 6.4 percent in December from 6.7 percent in November 2016, remaining within the Government target range. This decline reflected in part the waning effect of the excise tax implemented in December 2015.

Non-food-non-fuel (NFNF) inflation declined to 4.6 percent in December from 5.5 percent in November. The 3-month annualized NFNF inflation also decreased in December, suggesting that there were no demand pressures in the economy.

The Monetary Policy Committee (MPC) from CBK has concluded that inflation is expected to remain within the government target range in the short term. However, it noted that increased uncertainties with regard to the prevailing drought conditions and risks in the global markets.

Related: Maize retailing Highest in Kisumu and Lowest in Mombasa

Gold Rates Register 0.24% Fall For Second Day In A Row