average of 5-years CAGR 16.2 percent for the last five years.

“This price change is attributable to the value add and the convenience attributed to the amenities provided in site and service schemes, while the commercial zones are attracting investors due to relaxed zoning regulations allowing for densification hence maximizing on the land usage compared to low rise residential areas,” according to Cytonn Investments’   Nairobi Metropolitan Area Land Report 2017 released on Monday.

The report was carried out in 18 suburbs and 11 satellite towns in the Nairobi Metropolitan Area which recorded the highest return at 19.4 percent in comparison to other investment asset classes. “This makes land an attractive investment opportunity, since it guarantees higher returns and hedges one from inflation and interest rate risks.”

“This is lower than other areas which can be associated to limiting plot ratios on land reducing the returns on investment on land.  However Spring Valley and Kitisuru recorded 5-years CAGR of 18.0 percent and 16.9 percent, respectively since indicating high demand by high end clientele seeking exclusivity and willing to pay a premium on the same,” said Mr. Johnson Ndege, the Market Research & Site Acquisition Manager of Cytonn Real Estate.

Kilimani experienced the highest capital appreciation growing with a 5-year CAGR of 25.8 percent between 2011 and 2016, attributable to area demand by the middle class and convenience associated to its close proximity to amenities.

Westlands and Nairobi Central Business District (CBD) recorded high capital appreciation rates of 24.7 percent and 24.6 percent respectively, over the last 5-years due to demand for commercial space by multinational corporations in Westlands and scarcity of development land in Nairobi CBD.

Dagoretti and Ridgeways recorded the highest 5-year CAGR at 28.0 percent and 21.0 percent. This is attributable to higher plot ratios resulting in higher returns on investments. Kahawa, Kasarani and Kileleshwa recorded the lowest 5-year CAGR at 12.7 percent, 13.3 percent and 13.9 percent. “Kasarani and Kahawa had low appreciation rates due to decreased investor appetite caused by inadequacy in implementation of planning regulations,” reads the report. 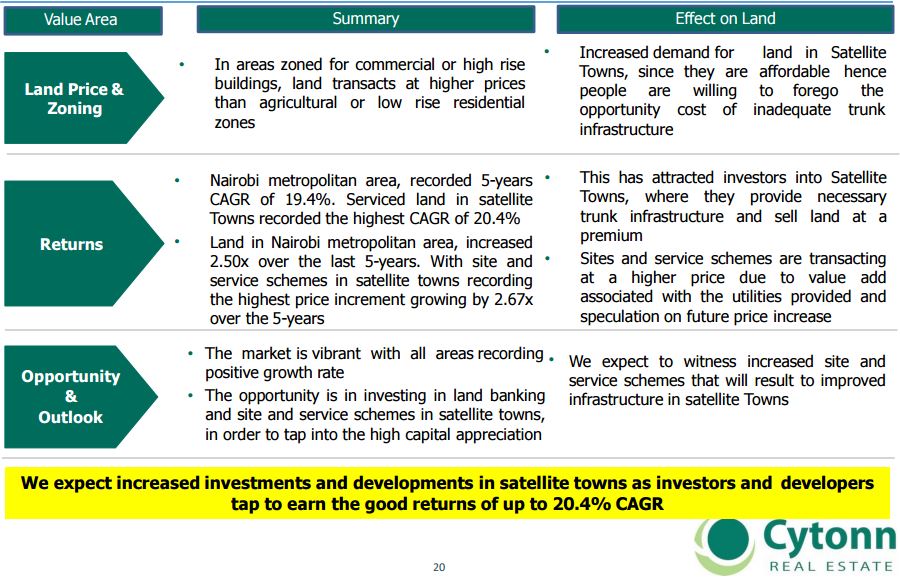 Cytonn Analysts noted that from their analysis, the land price change in the Nairobi Metropolitan area is affected mainly by planning regulations and trunk infrastructure such as sewer lines and road network in the respective areas.

However, they expect to witness increased land price in satellite towns as people and developers shift to tap into relatively cheaper land for development.

“Investors should tap into the sector through, land banking (This is a strategy of acquiring land in the areas scheduled for future growth in terms of infrastructure and holding it to sell for significant profit in the future) mainly in satellite towns to enjoy the capital appreciation at 20.0 percent and invest in site and service with capital appreciation 20.4 percent.”

“As such, in our opinion, the year 2017 will see the land real estate market remain largely stable and witness sustainable price increments. There is likely to be a slowdown in transaction volumes being witnessed in the 3rd quarter of 2017, just at the run up to the election date, but with relatively stable pricing,” they note.