Kenya’s economy expanded 4.7 percent in the first quarter of 2017 compared to 5.9 percent recorded in the same period of 2016, according to the Kenya National Bureau of Statistics (KNBS).

“The quarter’s growth was negatively impacted on by drought that emanated from failure of the 2016 short rains and delay in the onset of the 2017 long rains,” KNBS said in a statement.

“A slowdown in credit uptake also slowed economic growth during the period under review.” 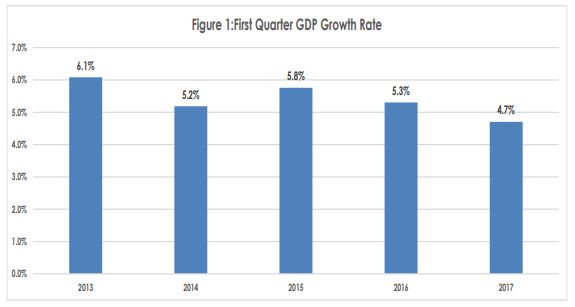 In the report, key sectors recorded improved growths with that of accommodation and food services being the highest at 15.8 per cent from 10.4 per cent during the first quarter of 2016.

Other major sectors whose growths improved significantly include; Wholesale and Retail trade; Real estate; Transport and Storage; and Information and Communication.

Electricity supply was also adversely impacted on by the shortage of rains resulting to slowed growth during the quarter under review. Finance and insurance sector’s growth slowed primarily on account of commercial bank’s reduced lending to the private sector. Figure 1 depicts the first quarter growths for the last 5 years.