China “a gift bestowed from heaven” for Africa in Railways Infrastructure

China has become “a gift bestowed from heaven” for Africa, Nikolai Shcherbakov, an analyst at the Center for African Studies of the Institute of General History of the Russian Academy of Sciences (RAS), noted in an interview with Sputnik, adding that nobody except Beijing is willing to invest in the creation of railway infrastructure on the continent.

For landlocked Uganda, Rwanda and South Sudan the railway network provides an opportunity to reach the Indian Ocean via the port of Mombasa. The construction of the Nairobi-Mombasa line within this country will become the second phase of the construction of the East African rail network. China is ready to invest almost $4 billion in the project. Read: 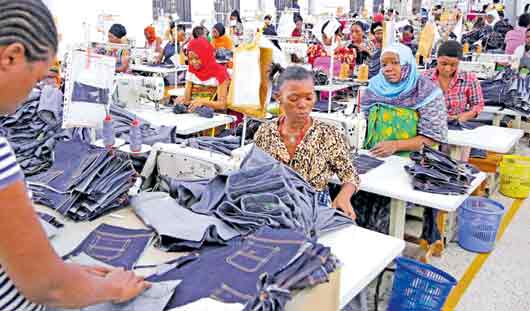 Tanzania Tooku Garments Company Limited, producing clothing for the US market is set for expansion to increase production in order to meet demand in the market.

Export Processing Zone Authority (EPZA) Director General Joseph Simbakalia, said in Dar es Salaam over the weekend during the tour of the students and staff from the National Defence College (NDC) the garment factory operating at the Benjamin Mkapa Special Economic Zone, Mabibo External is one of the success stories. Read:

Eritrea has temporarily shut down nearly 450 private businesses, the latest in a series of moves that has sent shockwaves through the economy of the Red Sea nation.

The closures were a response to companies hoarding cash and “failing to do business through checks and other banking systems,” according to a Dec. 29 editorial published by Eritrea’s Ministry of Information on the state-run website Shabait.com.

Africa is dangerously unprepared when it comes to climate-related disasters

Extreme weather and climate change is to blame for nine out of 10 disasters in Africa, threatening the continent’s economic gains with floods, droughts, tropical cyclones and landslides which cause heavy damage to infrastructure and property as well as losses to human life and livelihoods. The World Bank estimates that US$1.5 billion is needed to modernise the continent’s weather observation systems.

“Effective hydro-meteorological services, such as advanced weather and climate forecasting or simple and sustainable river level gauges, would help ensure that communities have the early warnings needed to prepare before disasters struck,” said Petteri Taalas, secretary-general of the World Meteorological Organization (WMO).