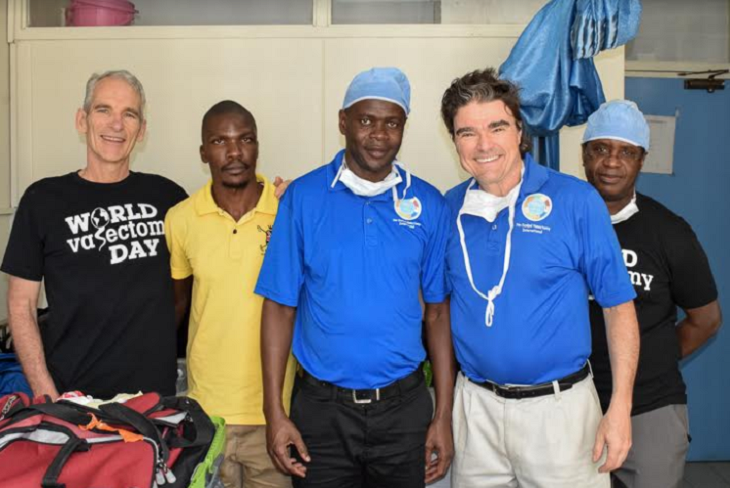 When Dr. Douglas Stein and his team of international experts landed in Nairobi to offer free vasectomies for a period of four days, they had little hope of mobilizing Kenyan men.

“We came in on very short notice. Unlike in 2016, where we had an amazing campaign prior to the World Vasectomy Day, for this one, we almost had no time,” said Dr. Stein.

He and his team were invited by Dr. Charles Ochieng, a Kenyan pioneer vasectomist who operates in Kenya and East Africa.

“When they told me that they had landed, I all of the sudden became scared. It was Friday, the first vasectomy was to go down on Monday and I had no idea how we were going to get hold of even a single man,” said Dr. Ochieng, breaking into a soft laugh.

In Kenya, the issue of family planning is largely associated with women and discussed in hushed tones when it comes to men. “There is no family planning for men. It is women who were created to have family planning, not us,” said one patient, Derick Odhiambo, from Nyando, Kisumu County, when he was asked about male family planning by one of the local television channels.

Most men in Kenya share the same sentiments as Derick and this was one of the hurdles the doctors were going to face when advocating for a vasectomy.

Nevertheless, “On Monday, more than ten men turned up. I could not believe it. Nobody asked them to come. They came on their own will to have a vasectomy. I was amazed,” proclaimed Dr. Stein.

Compared to the November 2016 vasectomy drive at the Kenyan National Theatre, the Kenyan media was much more willing to take up the discussion around family planning for men during this year’s event. For the first time, journalists really tried to demystify vasectomy and the medical procedure.

By the time the vasectomy drive ended last Thursday, a total of 96 men underwent the simple and fast procedure, a figure the experts had not expected.

“The numbers are good though not to the levels we want. A lot of Kenyan men still think that vasectomy is castration, but it is not. This is a modern, safe and effective family method for men whose families are complete,” said Dr. Ochieng.

Jonathan Stack, a filmmaker who has been documenting the vasectomy movement across Europe for years and also is a co-founder of World Vasectomy Day, said that Kenyans are among the few people who are ready to embrace change.

“With the right information, and with time, I think Kenyans are amazing and ready to embrace change and soon, vasectomy will be part of family planning in many households,” he said.

One interesting thing about all the 96 men who turned up for vasectomy is that none of them wanted to use his real name. Doctors had to repeatedly assure them that the information they were giving was confidential and only known to them and the clinic’s staff.

“90 percent did not want to use their real name. This shows how the vasectomy is viewed. I think most of them feared being ‘victimized’ by friends and family members because vasectomy is a ‘strange’ idea to them,” said Dr. Ochieng.

After holding two successful events in Kenya, World Vasectomy Day is heading to Rwanda where the non-profit organization will be holding its annual vasectomy drive in November. It seems like male family planning is slowly turning into a pan-African movement.