According to IMF projections, Ethiopia will have the highest GDP growth in 2019 though it will be slightly lower than its current GDP. In 2019, Ethiopia’s GDP is expected to be at 8.339 percent, a slight dip from the current 8.546 percent.

The image below shows real GDP as outlined by IMF for eight countries: 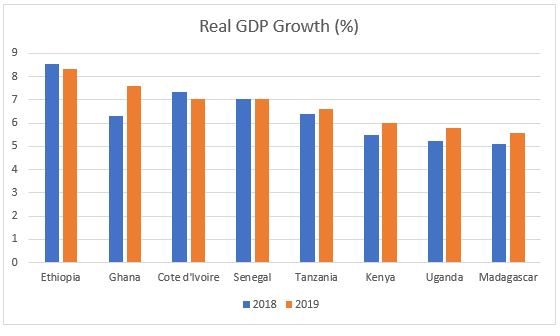 How Kenya Can Grow Her GDP

The cost of doing business in Kenya is just unbearable for most investors. Power bills are the highest in the region, the cost of fuel is also the highest and the taxes levied are far much higher than in the neighboring countries.

Kenya’s infrastructure is still wanting. We cannot keep on singing about SGR as though we achieved the whole world. More roads need to be constructed in most parts of the country to enable investments.