According to Trading Economics, which listed data from 157 countries, Kenya ranks at position 24 in Africa in terms of the highest personal income tax rates and the 81st globally.

Income tax is one hot potato for political debates across the globe. From unhealthy and uncommonly high tax rates to complaints by the citizens for governments that misuse their taxes, a lot more vices creep up daily, and corruption is right at the top.

The idea behind paying taxes is that the government is supposed to provide services for that. For example, if you fall ill or become unemployed the government will contribute and there are also generous pension arrangements. At least that is what the books say.

Part of the revenue collected from taxing people goes to the growth of several sectors of economy and funding projects for developments across the country.

Tax can simply be defined as a compulsory unrequited payment to the government. A taxable base is the base amount on which the tax rate is applied, like corporate income, personal income, or property.

This post presents a review of personal income tax rates across the globe. You will notice that tax rates do vary dramatically depending on which country you live in. Perhaps this is your chance to get a free escape from hefty rates that stifle your growth into an otherwise better country; good luck with that.

The marginal tax rate is one commonly used tool for comparing taxation levels across different countries. It is simply the rate on the highest income tax bracket.

Of course, there are lots of ways of comparing the tax burden that different countries place on their citizens. However, the method is fairly complicated.

Complex tax laws and the varying perception of what constitutes a high tax burden by different groups within an economy makes the process difficult. This is primarily why the use of the marginal tax rate is more convenient.

On the other hand, a proportional regime is where the tax rate stays the same regardless of the size of the taxable base.

Various countries use different taxation methods for different types of income—for example, a progressive tax for income tax and a flat tax for sales tax.

Many countries have adopted the aspect of progressive tax as a taxation method for individual income tax.

In Kenya, for example, income taxes, such as corporation and PAYE, are good examples of progressive taxes. The higher you earn, the more tax you pay.

Consumption taxes, such as VAT and excise duty are perfect examples of regressive taxes. This is because these taxes are levied on goods and services which are consumed by individuals regardless of their income levels. In between is a proportional tax.

Personal income taxes across the globe

It was followed by followed by Chad and Ivory Coast with 60 percent, and Aruba, which has for over the years been among the top, with 59 percent.

Here is a table showing the summary of the top 10 countries with the highest personal income tax globally. The data is based on official sources, not third-party data providers, and the facts are regularly checked for inconsistencies. 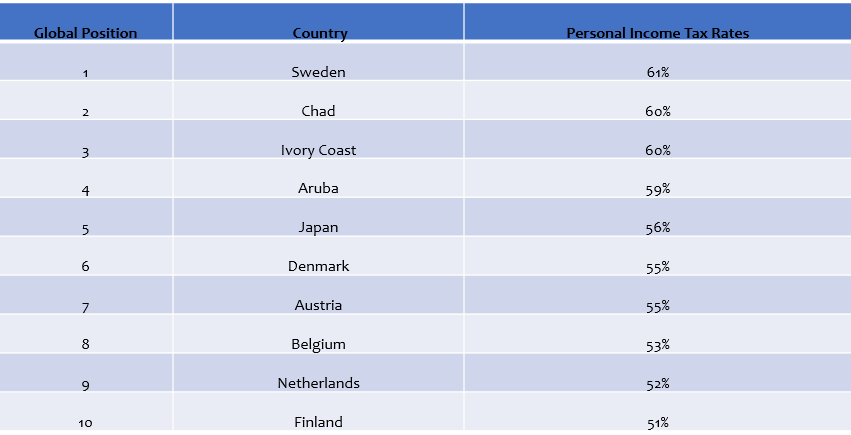 Well, one can pretty much deduce that tax rates vary in each country, from well above 50 percent to 0 percent for the average wage earner.

The UAE folks enjoy zero tax burden. The region, among other several countries including the Bahamas, is the only place you can negotiate for a specific salary and get the actual amount.

As indicated above, Chad and Ivory Coast are among the first three with the highest personal income rate. Zimbabwe comes in at the third position as shown below. 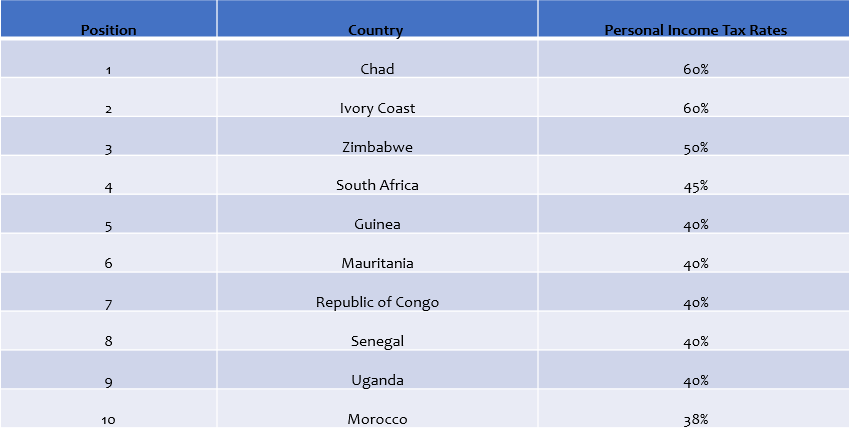 According to Trading Economics, which listed data from 157 countries, Kenya ranks at position 24 in Africa in terms of the highest personal income tax rates and the 81st globally.

Personal Income Tax Rate in Kenya is referred to as PAYE; Pay As You Earn. The image below shows how various individuals in different tax brackets are taxed in Kenya.

A maximum rate of 30 percent, as shown above, is charged on income in excess of 564,709 shillings.

Bonuses, overtime allowances, and retirement benefits paid to employees earning less than 147,580 shillings per annum are now exempt from tax.

The tax-free amount is based on the employment income before the bonus, overtime allowances, and retirement benefits.