Most African countries have a positive economic outlook, largely due to their diverse economies, according to the Institute of Chartered Accountants in England and Wales (ICAEW) latest report, Economic Insight: Africa Q2 2019.

The accountancy body provides GDP growth forecasts for various regions including East Africa, which is the region in Africa that was estimated to have experienced the most rapid real GDP growth in 2018 and is forecast to continue doing so over the next two years, with a projected growth rate of 6.1 percent.

Behind East Africa is the franc zone as the second-fastest growing region in Africa where GDP growth is forecast at 4.9% for 2019.

The report, commissioned by ICAEW and produced by partner and forecaster Oxford Economics, underscores the role of the banking sector in supporting the GDP growth of Kenya’s economy through diversification.

East Africa’s growth is mainly driven by strong performances in the two major economies which are Kenya and Ethiopia. 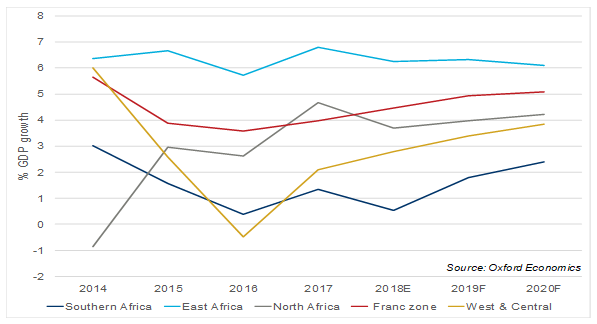 Kenya, whose economy is estimated to be worth about KES 9 trillion, owes the resilience of its GDP growth, projected at 5.5%, to a dynamic banking sector. The Kenyan banking sector has taken the lead in the region recently and its most successful banks are regional leaders. The growth of this sector has also facilitated the merger of big national brands as they compete for dominance within the local banking sector.

The planned merger between Kenya’s biggest lender by assets, KCB Group, and the National Bank of Kenya (NBK), in addition to the planned one between NIC Bank and the Commercial Bank of Africa, indicate the growing influence that the banking sector in Kenya has on the country’s ongoing economic diversification.

Michael Armstrong, ICAEW’s Regional Director for the Middle East, Africa, and South Asia said that the macroeconomic benefits of diversification are evident from a comparison of real GDP growth rates between the regions of Africa.

“As a global trade war rages, East African economies have minimal fears of contagion from lower commodity prices,” said Mr. Armstrong. “Their diversified economies will be best placed to weather the storm caused by the instability of oil prices. This, in addition to a well-regulated, mainly private banking sector are key to financing the economies,” he added.

The report continues to state that East Africa’s growth has also been reinforced by the growth of Ethiopia’s economy, an eight trillion-shilling economy which is forecast to grow by 7.9 percent, while Rwanda’s projected real GDP growth rate for 2019 is 7.4 percent.

The franc zone’s GDP growth is forecast at 4.9 percent for 2019. Most of the growth will take place in Ivory Coast, which is forecast to show real GDP growth of 7.0 percent this year thanks in large part to services growth (although cocoa exports still matter).

North Africa presents a somewhat mixed bag: Egypt, Morocco, and Tunisia have diversified economies, whereas Algeria and Libya are extremely dependent on oil and gas.

The latter two are forecast to have a very disappointing year in 2019: Libya’s economy will contract by 4.1%, and Algeria’s will grow by only 2.0 percent. This contrasts with a growth rate of 5.5 percent in Egypt, where the government has been exemplary in implementing constructive economic policy.

However, to sustain this kind of growth into the future the government will have to encourage private-sector growth and improve the corporate sector’s access to finance.

Southern Africa is the slowest-growing region on the continent, with GDP growth forecast at barely 1.8 percent this year: less than a third of East Africa’s growth rate.

Growth in the south is dragged down by South Africa, the region’s dominant economy (it accounts for more than two-thirds of regional output), where growth is forecast to remain at a dismal 0.8 percent in 2019 – the same level as in 2018. Slow growth in Angola (+1.1 percent in 2019, after a 2.5 percent contraction in 2018), the region’s second-biggest economy, acts as a further brake on the region’s growth.

Here Are 10 Ways To Make Money Online In Kenya Today

Dear Entrepreneur: Be A thinker, Be A doer