When it comes to employment and financial empowerment, you need to secure a job that is singled out from the list of highest-paying jobs in Kenya.

Over the past 5 years, salaries of most careers have stagnated, even so, there are jobs whose salaries have grown tremendously, these jobs are those that need special skills and talent.

For instance, 10 years ago few people understood what software engineering entails, but a couple of years ago when technology became the driver of most of the institutions, graduates of this course (Software engineering) were sought and offered hefty perks.

Everybody in, but due to a large number of jobless graduates, the lucrative jobs are limited. You either require connections or excellent academic qualifications to get such jobs.

For job seekers, the first step into securing a high paying career is to highlight the jobs first, then research for areas where such opportunities are available. When job searching, make sure your CV looks impressive, your aggressiveness should also be first class.

Kenya is one of the countries with the fastest-developing economies in East Africa. Due to this meaningful level of economic growth coupled with other favorable factors, one can substantiate that there are a number of high-paying jobs in Kenya (Cam worst paying jobs in Kenya).

Below is a list of the best and worst paying jobs in Kenya 2019: 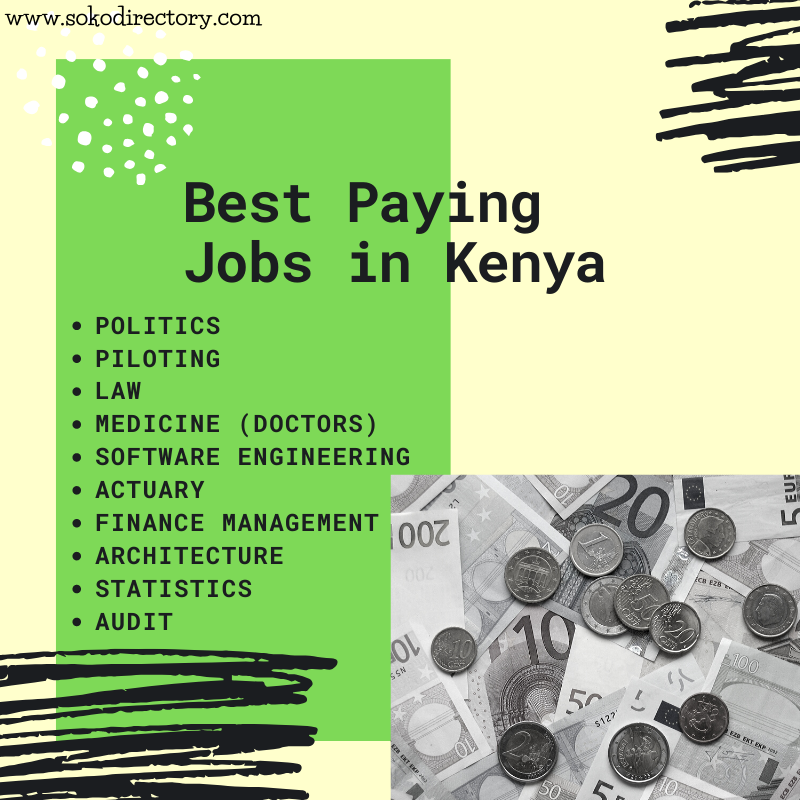 Africa has a well-grounded culture that regards politics as one of the fastest avenues to riches. County members of parliament, governors, senators, and members of the county assembly lie in this list.

Other beneficiaries are political activists, analysts, scholars, commentators, advisors, and writers are some of the latest class of workers to make a career out of politics.

Though piloting is well paying, it takes someone at least 3 years to complete coursework and Ksh 5 million in that duration for school fees.

Law is one of the best careers in Kenya and so far it’s among the best-paying professions. Lawyers struggle for 1 to 2 years but thereafter they start earning a decent income. But the amount you earn depends on the type of clients you attract, some of the best clients to represent are politicians and business persons.

The monthly income of an established lawyer is Ksh 250,000 but there are lawyers who make upwards of Ksh 2 million monthly.

Medicine and Surgery is one career that dominates the thoughts of many Kenyans because it pays handsomely.

Though medical doctors go on strike almost yearly, that doesn’t mean they are underpaid, probably they want to outshine everyone in terms of pay. The highest-paid doctors in Kenya pocket Ksh800,000 to Ksh2 million per month

Such institutions software engineers in excess of Ksh 200,000 per month regardless of one’s job experience.

Actuarial Science is a relatively new profession in Kenya but is one course every student would like to pursue. However, becoming a qualified actuary is no mean feat, you have to sweat. Graduating with an Actuarial Science degree is one step but qualifying as an actuary requires a certification from the Society of Actuaries or from the Institute and Faculty of Actuaries.

There are over 12 papers to be completed before one qualifies as an actuary. Upon completion, you will secure employment in IRA, RBA, Banks, stoke brokerages, Insurance companies, audit firms, Nairobi Securities Exchange, Capital Markets Authority or any financial institution in Kenya that requires risk and financial experts.

The average salary of a qualified actuary in Kenya is Ksh 300,000 per month. The highest paying sectors include insurance companies, audit firms, and actuarial firms.

With an actuarial degree and professional qualification in actuarial science, the average pay you’ll earn per month is Ksh 180,000 to Ksh 1.5 million.

Though many Kenyans believe that finance and accounting is a flooded career, I still believe there are hopes for graduates. The hardest part is to rise from being a clerk or teller to becoming a finance manager.

Finance Managers’ monthly payments will not be below Ksh200,000. What determines the pay of an individual as a Finance Manager is the profitability of a company and salary policies of that company.

.An Architect is one with so much in his hands that he even lacks time to serve every client. For self-employed architects, the income is arrived at based on the type of clients you handle.

You might design a structure that costs Ksh5 billion and your take-home becomes Ksh 50 million. Another client will come with work that pays you Ksh50,000. But at the end of the day, you’ll make not less than Ksh 300,000 per month.

Statistics is certainly a tough course but its fruits are sweet.

The highest-paid statisticians are those who hold PhDs and over 5 years’ experience, the average net pay for these professionals is Ksh 250,000 per month.

Auditors cannot be left out either, they amount to the highest paid professionals in Kenya. The most successful ones are those who work for the Big Four audit institutions (PWC, Earnest & Young, Deloitte, and KPMG). The starting salary of an auditor in these institutions is Ksh 75,000 to Ksh150,000 per month. With over 3 years of experience, you must pocket nearly Ksh300,000 per month.

Let’s take a look into the lower-paying jobs in Kenya: 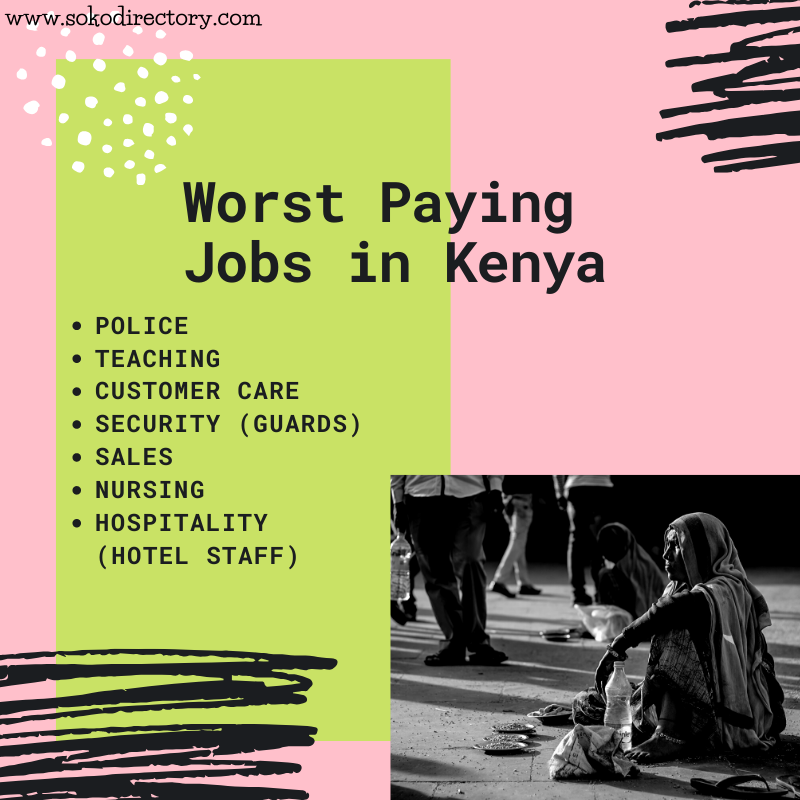 Police officers seem to have been afflicted with meager salaries which can hardly keep them at reasonable living standards. With the minimum monthly income of Ksh 20,000, an average Kenyan police officer finds himself amongst the lowest-paid professionals in the country. In consequence of this unfair treatment, many police officers have made bribery a priority and alternative option for making money

It isn’t strange to find teaching on this list but it is very unfortunate that teachers fall into the category of low salary earners.

Considering the significant knowledge teachers impart to others, one could suggest that they appear amongst the highest-paid professionals in any country.

Teachers working in public schools are poorly rewarded and in many cases, their salaries come with specified deductions. This has made teaching one of the worst-paying jobs in Kenya

Companies recruit people who are meant to receive customers’ complaints and handle them effectively. This job is very tedious because customers maintain certain rights even when they seem annoying. As of now, customer care is still one of the worst paying jobs in Kenya since there are a lot of low-class companies paying customer care agents the monthly salary of Ksh 20,000.

Everyone values being protected and that is why people are frequently employed to serve as security guards. Without any doubt, working as a security guard is one of the most dangerous professions people take on in Kenya. In spite of the risks associated with their profession, some security guards are rewarded with as low as Ksh 10,000 on a monthly basis.

In Kenya, the job of a salesperson is regarded with low esteem and the salary it attracts can be as low as Ksh 10,000. Irrespective of that, we still have many people doing the job due to limited employment opportunities. Speaking generally, sales personnel are remunerated poorly in Kenya but this still doesn’t mean there are no companies that pay sales personnel beautifully in the country.

Despite the prestige supposedly associated with the job of hospitality, some hotel staffers endure a salary range of Ksh 10,000 – 25,000. Over and above this insubstantial salary, these staff may have to dispose of themselves with great care lest they lose their positions. Seriously speaking, a hotel receptionist should know that he/she could be dismissed for disrespecting hotel guests even when they do silly things.

Like teachers, nurses are poorly rewarded in Kenya. However, on a factual note, nurses should be found among the highest-paid medical professionals in any country. Nursing is not an easy task as it demands to be hospitable, caring and attentive.

Just like doctors, nurses devote time to saving people’s lives but as sad as it is, some Kenyan nurses are paid below Ksh 40,000 per month. For the fact that nurses are qualified health professionals, they deserve to be paid substantially. Due to the poor remuneration, some Kenyans are not showing interest in the medical field whereas the country [Kenya] is short of health practitioners including doctors.

READ: Here Are 10 Things you Need To Know About Okoa Jahazi