Kenya is a corrupt nation. Other nations have the mafia but in Kenya, the mafia has the nation. The country is led by powerful cartels who are always busy looting it to the ground.

The cartels who run this country are such powerful that if you dare stand against them, you are either killed or forced into exile.

According to a list compiled by the Corruption Tracker, Kenya has lost a whopping 8,084,682,800,000 (8.08 trillion shillings) to corruption under the administration of Jubilee led by President Uhuru Kenyatta and his Deputy William Ruto.

Do you still remember the laptop scandal? These were funds that had been released for the purchase of laptops for standard one kids in public primary schools as pledged by President Uhuru Kenyatta. Well, the nation lost 24,600,000,000 (24.6 billion shillings). Nobody was arrested. Nobody was jailed.

Do you remember the hole uncovered by the then Auditor General Edward Ouko at the Ministry of Health worth 11,000,000,000 (11 billion shillings) in 2018? Nobody was arrested. Nobody was jailed.

I am sure you still remember the NYS 1 that rocked the Jubilee government. More than 9 billion shillings are said to have been looted. As it is normal, those who took part were elected in big offices and some are still walking free.

Do you remember that time in 2018 when the Kenya Airports Authority (KAA) could not trace 4.3 billion shillings to pay a Chinese firm that had constructed a terminal? This is a country of magicians. Money just disappears.

Here are 10 corruption scandals that came to the face in 2019 with no cash recovered: 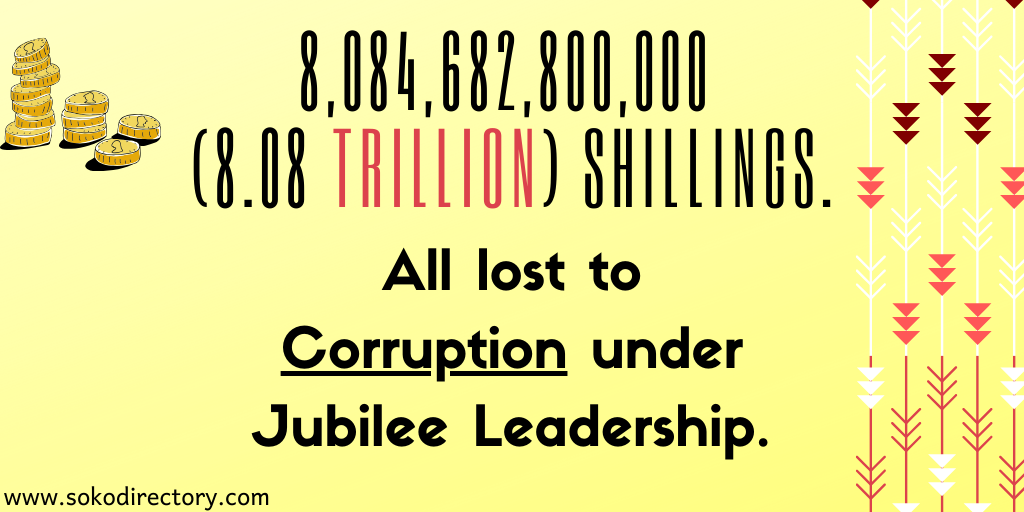 4 Billion Shillings At The Ministry of Health

Kenya’s Ministry of Health is ailing. It has always been ailing. The Ministry is deeply rooted in numerous corruption scandals involving billions of taxpayers’ money.

The most recent scandal is that where the Cabinet Secretary for Health, Sicily Kariuki is accused of having inflated the price of equipment by a whopping 4 billion shillings.

A Dutch firm employed to produce medical tools to hospitals in a 63 billion shilling program publicly disowned a value record tabled in Parliament by the Ministry of Well-being.

Philips Medical Methods Nederland BV was initially contracted by the Authorities to ship Intensive Care Unit (ICU) tools at a price of 3.6 billion shillings but the fee later shot to as much as 4.5 billion shillings.

The Missing 5.6 Billion Shillings At NSSF

As the poor workers work hard to have their cash deducted and remitted to the National Social and Security Fund (NSSF), the rich, who don’t sweat at all are there waiting for it.

Statements show that at list 5.6 billion shillings are missing from NSSF’s e-book accounts, putting in jeopardy the lives of more than 1,000 Kenyan workers who retire annually.

The report tabled within the Nationwide Meeting final week says whereas the company’s restoration efforts had borne fruit, solely 771 million shillings had been collected by March 2019, leaving an impressive steadiness of 5.6 billion shillings.

The Missing 2.3 Billion Shillings At NCPB

It emerged that the National Cereals and Produce Board (NCPB) could not account for 2.3 billion shillings that were realized from the sale of various fertilizers to farmers in 2018.

The board that is mandated to buying produce from farmers has been swimming from one scandal to another, including the looting of the cash meant to purchase maize from farmers.

The Communications Authority, according to the Auditor General, could not account for a whopping 2.6 billion shillings. It also emerged that during the Christmas period in 2018, the board members and administrators paid themselves 2.1 billion shillings for Christmas in form of vouchers.

The Kenya Revenue Authority (KRA) is the institution mandated with collecting and distributing taxes from Kenya. The authority, however, has been torn apart with numerous misappropriation of the taxes collected including senior officials colluding with those who want to evade paying taxes.

For the taxes collected in 2017/2018, according to the Auditor General, some 1 billion shillings could not reflect in the accounts of the authority.

It emerged that data for the loan price worth 3.9 billion shillings from Uwezo Fund was missing, making it hard for the Fund to account for the billions that had been put aside for the same.

The State Division of Particular Programs under the Ministry of Devolution could not account for 3.4 billion shillings spent within the “distribution of reduction meals for weak individuals.”

“Given the foregoing, the accuracy completeness, validity, and accountability of switch stability of Sh3.four billion couldn’t be confirmed,” said the Auditor General.

The 5.6 Billion Shillings Medical Scheme Fraud Orchestrated By Hospitals, Academics And Their Kin

Fraudulent ways in which academics and hospitals used to abuse the Sh5.6 billion government-funded medical cowl emerged this year.

Some academics listed false beneficiaries whereas others made big claims primarily based on false prognosis, threatening to cripple the multi-billion cowl.

In some instances, medical amenities demanded a cost for sufferers not handled whereas others recorded an incorrect variety of days sufferers spent within the amenities to rake in more cash.

During the year, it emerged that counties inflated payments owed to suppliers to the tune of 60 billion shillings, showing how individuals in county governments made billions by defrauding the Treasury.

County governments in Kenya have emerged as the leading avenues for the looting of public resources led by corrupt and rogue county governors.

Cartels working from the center of Kenya’s electrical energy, Kenya Energy, according to Director of Criminal Investigation (DCI), George Kinoti, stole 150 billion shillings from unsuspecting prospects over a period of 5 years.

READ: Top Corrupt Ministries and Institutions in the Kenyan Government 2019

NHIF Benefits: Why You Need To Sign Up And Ensure Timely Premiums