Kenyans Angered Over Shell’s Adulterated Fuel Across the Country

Kenyans have taken to social media platforms to complain to what they termed as Shell’s habit of selling adulterated fuel where diesel is said to be mixed with kerosene.

The marketer, Vivo Energy that distributes and sells Shell branded products has now found itself on the wrong side with its customers as customers blame it for engaging in fraudulent activities for their own gain.

Early this year, the Energy Regulatory Commission, ERC, published names of fuel businesses that were involved in selling substandard products including adulterated fuel to their customers. Among the list was Vivo Energy for selling spiked fuel to customers. Here is part of the statement: 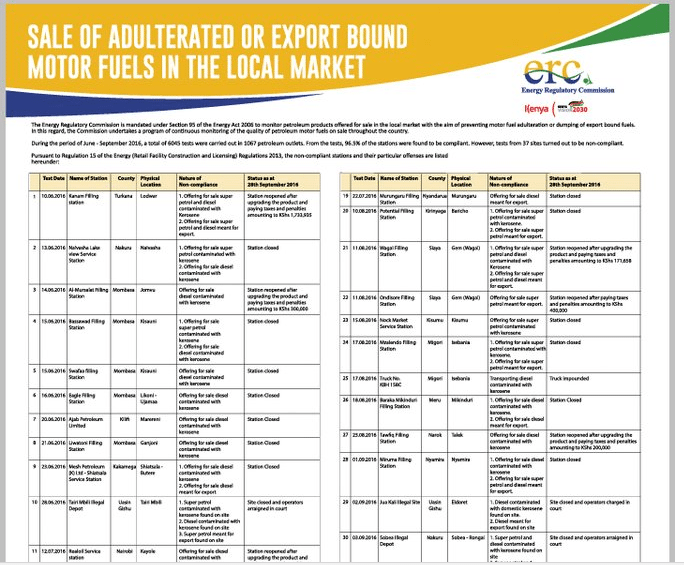 Kenyans anger even boiled the more when the Managing Director for Vivo Energy Polycarp Igathe threatened to sue the Energy Regulatory Commission for putting the name of his company among the list of fraud fuel merchants. Kenyans feel that Mr. Igathe wanted to conceal the truth that had been let out by ERC instead of coming out clean about the claims.

Early this year, Kenyans complained that despite numerous complaints and concerns to Shell, none of their concerns were addressed as their vehicles continued to be damaged. Some of those Kenyans had the following feelings:

@kenyapipeline Shell at Rabuor selling adulterated fuel lying that they only have vpower. I bought 2k worthn suffered.

@Shell Westlands, whenever I fuel with you my dashboard lights up with errors which doesn’t happen when I fuel elsewhere. Adulterated fuel??

Buyer BEWARE!
Fuelled adulterated at Shell next to Panafric. Fuel at your own risk @vivoenergykenya @ConsumersKenya pic.twitter.com/hz3kQ1EGHK

We cant beg Shell to sell us good fuel,its them to beg us to buy their fuel,the best u can do is to drive past them #ArrestPolycarpIgathe

It is now emerging that the sale of adulterated fuel by Shell is happening all over the country with Kenyans calling on their friends to avoid fueling their cars at Shell Petrol Stations. This is what angry Kenyans are saying:

09:23 @dailynation
You are warned, fuel at any shell station at your own risk.i did and my car literally died via @EaglesytDesigns

@C_NyaKundiH @WanjikuRevolt even the shell on Zimmerman route wooi i fueled and my car almost got ruined.fuel had water

With the hashtag #ArrestPolycarpIgathe, the Managing Director for Vivo Energy, Kenyans want the authority to hold the MD accountable for what is happening in his company. Kenyans say that the man has been ignoring them and taking them for granted. They are saying:

Lots of complaints from friends, & personal experience with adulterated fuel from @vivoenergykenya Shell

#ArrestPolycarpIgathe and isn’t it at Shell Stations that a credit card scamming was exposed recently? Lots frauds at @vivoenergykenya

Most Kenyans are also concerned about the silence from the Energy Regulatory Commission. Kenyans say that apart from publishing the names of fraudulent companies that sell spiked fuel, no major step has been taken. They say: