Archbishop Eliud Wabukala Thrown into a Den of Hungry Wolves 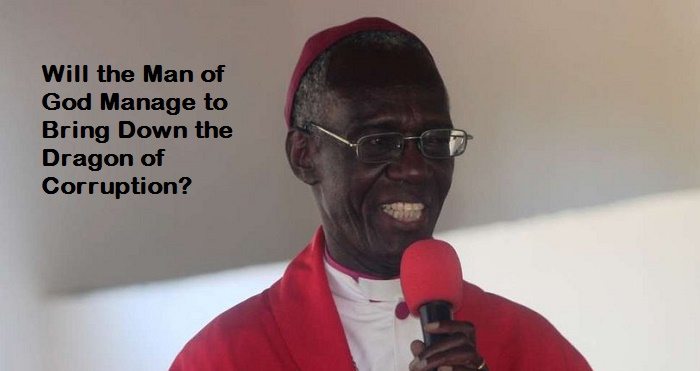 The National Assembly approved the nomination of the retired Anglican Archbishop Eliud Wabukala as the new chair to the Ethics and Anti-Corruption Commission, EACC.

In a special sitting that was held on Tuesday, Members of Parliament unanimously endorsed the soft-spoken archbishop putting him just a step away from the top sit at the integrity house.

Bishop Wabukala now awaits the official appointment by the Head of State, President Uhuru Kenyatta before officially taking over.

From the sentiments sent out by various legislators, the good old archbishop was being through into a den of angry and hungry wolves that were ready to pounce on him and tear him into shreds because he will have to cross their path in several occasions.

The archbishop will be inheriting a seat whose predecessors have had to pass through the window due to pressure and heat generated on them from the corrupt cartels who control even the corridors of justice and making every effort to crush the efforts of the commission to fight corruption.

The recent chair to exit the integrity house was Phillip Kinisu who was said to have taken part in the looting of the multimillion National Youth Service scandal. It was alleged that a company belonging to Mr. Kinisu got more than 200 million shillings from the NYS on goods and services that were never delivered.

Another person who was forced through the window by the corrupt cartels was Professor Patrick Lumumba Otieno (PLO) who when he took over the integrity house, people celebrated that at long last, the savior who was ready to cut into pieces the dragon of corruption had arrived. He left the same way he came in.

At one point, the retired Chief Justice, Dr. Willy Mutunga said that Kenya is a country that is run by powerful cartels who control the corridors of justice and that whoever dares standing on their way is either killed or forced into exile.

Human right activist Boniface Mwangi also said that Kenya is a strange country, that as other countries have the mafias, in Kenya, the mafias have the country.

Most Kenyans feel that Bishop Wabukala may not be capable of facing the powerful corrupt officials in the country he ‘looks and talks softly’ and lacks the toughness of taking the bull by its horns. Some say that the Man of God might even resolve to praying for the cartels for the m to repent other than taking them to relevant authorities for prosecution.

The country is waiting to see how the good old bishop will handle the NYS scandal where more than one billion shillings were looted and no one has been judged and jailed. The old man comes in at the time when there are allegations of more than five billion shillings having been looted from the Ministry of Health.

The archbishop has been thrown into the den of angry and hungry wolves. Will they tear him into pieces? Will he pray like Daniel of the Bible did so that instead of the wolves harming him they turn into his friends? Only time will tell.