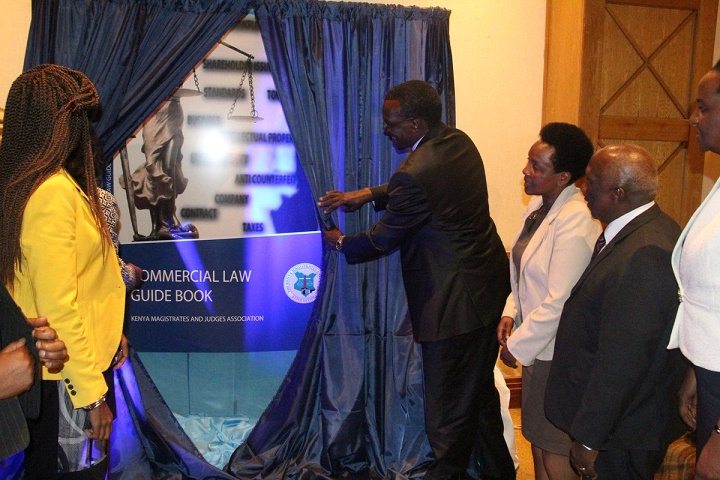 The Kenya business sector is set to benefit from expedited adjudication of cases arising from commercial disputes with the launch of the Commercial Law Guidebook.

Speaking during the launch on Thursday, Chief Justice David Maraga stated that the Commercial Law Guidebook will go a long way in educating the general public on commercial court systems.

“The booklet will serve as reference material for those dealing with commercial cases. It includes best practices in handling commercial disputes such illicit trade, customs, standards and intellectual properties.”

The CJ noted that Kenya’s development gains are hampered by backlog of cases and a host of business malpractices among them illicit trade, corruption, tax evasion, trading with substandard goods and infringement of intellectual properties.

“The Kenya commercial justice system is still not robust as it should be. It has over 5000 pending cases with billions still held back.”

This Guidebook provides a platform where the needs of law practitioners, business community and the general public are addressed.

The Chief Justice reiterated that continued collaboration between the Judiciary and the Business Community is key in achieving economic growth in the country.

KAM Chairlady, Ms. Flora Mutahi stated that the development of the Guidebook was a great milestone for the private sector and the general public. “We are hopeful that this publication will contribute to realization of well informed decisions, improved case flow management and increased speed at which cases are handled and resolved.”

The President of the Kenya Magistrates and Judges Association, Lady Justice Hedwig Ong’udi stated that the Guidebook was developed to help resolve commercial disputes. “One of the major reasons why we are doing this is to deal with the monster called Backlog. This monster, which slows and even blocks the entire justice system in some cases, is almost entirely responsible for the negative vibe that we all get as the Judiciary.”

Ms. Mutahi further stated that timely resolution of disputes, predictability of the application of the law, uniformity in interpretation of the law, well-informed decisions, established court procedures and efficient case flow management are key factors in building confidence in the judicial system.

“We hope that the Judiciary will look out for the best and efficient reforms practices globally to increase the country’s competitiveness. The Judiciary should not shy away from overhauling the legal and institutional frameworks in the country in line with our Constitution. This is to ensure predictability and consistencies in our laws,” added Ms. Mutahi.

The guide book is divided into six parts: