President Uhuru Kenyatta and his Deputy William Ruto will be sworn in for a second and final five-year term in office through the Jubilee Party.

He won 98.26 percent (7,483, 895 votes)  according to the  Independent Electoral and Boundaries Commission (IEBC) in the October 26 repeat poll. Only 39 per cent of registered voters took part.

The repeat presidential vote followed an election in August, which Kenyatta also won but which was nullified by the Supreme Court on procedural grounds.

“Alongside you all, Jubilee has been hard at work across this country and laid the foundations for a vibrant and modern Kenya that provides us all with the platform to achieve our true potential. This work continues,” says President Uhuru Kenyatta. “We must now redouble our efforts to build upon the foundations of success. The task is not yet complete. The work must continue and should not be derailed.”

Despite the fact that, Kenya has had a prolonged electioneering period, the rhetoric of the General Elections is now over and the proof the pudding is in the eating and in this case the proof of leadership, statesmanship for Uhuru is now squarely on his shoulders.

Consequently, this will not be easy. 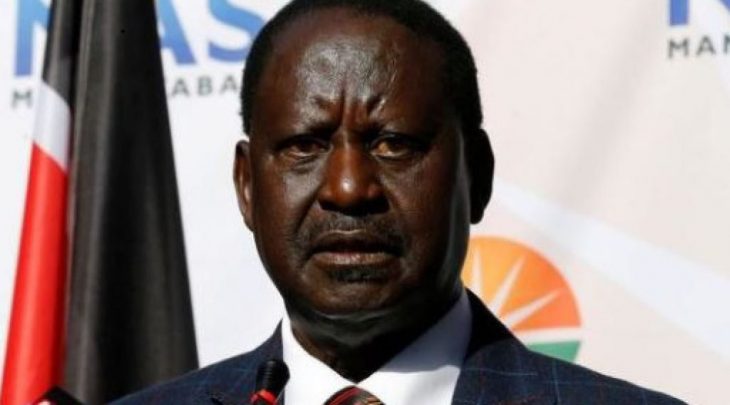 The National Super Alliance (NASA) has vehemently said they will not recognise Uhuru as president.

“We affirm that we do not recognise the Oct 26 election and to declare as per Article 1 of the Constitution we have not individually and collectively delegated our sovereignty to Uhuru Government,” said Musalia Mudavadi to the media on Saturday  during a leadership forum held in Machakos County.

The Raila Odinga led coalition of the opposition resolved that the people have been compelled to go back to the drawing board. “The ‘People’s Assembly’ is that drawing board. It is not a parallel government. It is not an alternative parliament or county assembly  It is a process of charting our political destiny. It will protect our county governments… it will reflect the politics of exclusion and ethnic dominance.”

The coalition asserts that ‘Raila Odinga and Kalonzo Musyoka as the legitimate President and Deputy president and as a sovereign people commit ourselves to see it that they assume office’, “That is our position and what we have done, what we will do will be in the framework of the Constitution,” said the coalition.

Indeed, the greatest challenge that faces the Uhuru government is fostering citizenship is tied to that of ethnicity and an impediment to Kenya’s transition to democracy.

Manoah Esipisu, the Secretary, Communication and State House Spokesperson after the Supreme Court ruling that upheld Uhuru victory said “The President would like to assure all Kenyans, those who voted for him and those who did not, that he will be President of all Kenyans. No one should fear that they will be marginalised or penalised for their political choice.”

On the other hand, the opposition says “There is nothing that has been done that is treasonable,” in relation to them holding a memorial service of Kenyans alleged killed by the police on the day Uhuru will be sworn.

The unfolding events emerge in the wake of the Mo Ibrahim Index of African Governance where Kenya scored 59.3 per cent in overall governance, to be ranked 13th in Africa.

In his final term, many observers are keen to see how his government will have the courage to implement scrupulously the dreams and promises of Kenyans enshrined in the letter and spirit of the Constitution of Kenya 2010.

“There is a reluctance to confront ethnicity as a problem in policy and politics, yet it is the central pillar in Kenya’s  politics and development and therefore, critical to democracy and participation,” says Professor Karuti Kanyiga. “There is need to confront ethnicity by developing relevant policies and laws, as well as taking appropriate political actions.”

In building a united and cohesive nation, the Jubilee party envisions “A Kenya where every person and every community is proud to be Kenyan and actively contributes to strengthen our national fabric.”

We seek to put an end to politics based on division and believe that strong parties, both of Government and Opposition, are a prerequisite of a thriving country. Our goal will have been achieved when all communities in Kenya are confident that they have a Government that listens to, cares about and addresses their needs,” notes the party manifesto.

Thus, the foundation President Uhuru Kenyatta lays down in the next five years will determine whether the country will become an enduring great nation to rival any of the other Great Nations in this world or a failed Nation.

A nation whose first term witnessed 40 percent unemployment rate, tainted by corruption, rising debt – KSh 4.4 trillion, about 52 per cent of the GDP.

A Budget Review and Outlook Paper (BROP) released in September showed that the level of public debt to GDP ratio was projected to rise to 59.0 per cent this fiscal year, from a previous target of 51.8 per cent.

Furthermore, the budget deficit to GDP is expected to increase to 7.9 percent in the fiscal year 2017/18 from 6.2 percent previously and public debt to GDP ratio was expected to hit 59.0 percent by December 2017 from 51.8 percent previously targeted, that being 900 bps above the 50.0 percent IMF threshold, which is what is raising concerns over Kenya’s debt vulnerability.

The road ahead is challenging. How Uhuru will steer his government and the country will have a bearing on its stability, future growth, but also on the legitimacy question as well as on citizen’s confidence in the participating in a deeply divided society.

Kenyatta (born 26 October 1961) until his election as president in 2013, was serving in the government as its Deputy Prime Minister since 2008 as a result of the National Accord which was formulated after the Post-Election Violence.

He is a former Member of Parliament for Gatundu South Constituency and former Chairman of Kenya African National Union (KANU), which was a part of the Party of National Unity (PNU) before he quit and formed The National Alliance (TNA).

Kenyatta is the son of Jomo Kenyatta, the first president of Kenya by his fourth wife, Ngina Kenyatta. Born at the dawn of Kenya’s Independence, he carried in his name, Uhuru (Freedom), the aspirations of his father.

Uhuru attended the strictly Roman Catholic Saint Mary’s School in Nairobi and then Amherst College, Massachusetts, United States, where he graduated with a bachelor’s degree in politics and economics.

During Former President Daniel Moi’s era, he was nominated to Parliament in 2001; he became Minister for Local Government.

Kenyatta ran as KANU’s candidate in the December 2002 presidential election but lost to opposition candidate Mwai Kibaki by a large margin.

He subsequently became Leader of the Opposition in Parliament. He backed Kibaki for re-election in the December 2007 presidential election and was named Minister of Local Government by Kibaki in January 2008, before becoming Deputy Prime Minister and Minister of Trade in April 2008 as part of a coalition government.

Subsequently, Kenyatta was Minister of Finance from 2009 to 2012, while remaining Deputy Prime Minister.

For the first time, presidential candidates engaged in Kenya’s first televised debates and analysts and researchers had the best they could to shape the opinion of the electorate.

To win in the first round, a candidate was to poll more than 50% of the vote in general, and at least 25% in one half of the 47 counties nationally.