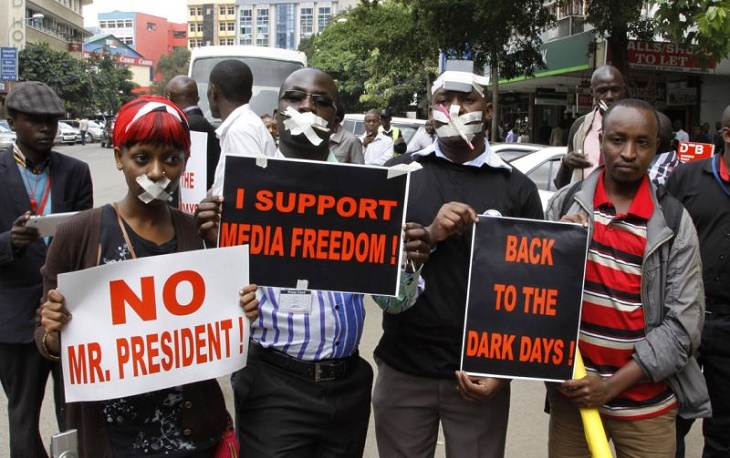 The Government has maintained that NTV, KTN and Citizen television stations will remain off air until it has completed investigations into the alleged ‘ serious breach of security’ during the swearing in Raila Odinga as people’s president on Tuesday.

Interior cabinet secretary Fred Matiang’i made this announcement during a press conference on Wednesday.

“The government has commenced full investigations around the purported ‘swearing in’ of Raila Odinga. The investigations will extend to conspirations and facilitators. upon completion of these investigations, appropriate legal action will be taken in accordance with the Laws of Kenya.”

According to the CS, the government was aware of the role of some elements in the media fraternity who participated in “furtherance of this illegal act.”

Matiang’i alleges that “Their complicity would have led to thousands of deaths of innocent Kenyans  due to the buildup of the incitement that was witnessed in early hours of the morning of 30th January 2018.”

The broadcasting signals of NTV, KTN and Citizen were switched off. However, the audience was able to follow the live coverage on social media and international TV channels.


In a Gazette Notice issued on Tuesday, Dr Fred Matiang’i  quoting section 22 of the Prevention of Organised Crimes Act, 2010 said  NRM “…to be an organised criminal group for the purpose of the Act.”

Read: Freedom of the Media: Article 34 of the Constitution of Kenya

On Monday night, the government warned the media not to provide live coverage of the event according to Linus Kaikai, chair of the Kenya Editors Guild.

“The Kenya Editors Guild is gravely alarmed over a developing trend by the government to gag or threaten the media over coverage of the current political events in the country,” he said in a statement.

“Kenyatta expressly threatened to shut down and revoke the licenses of any media houses that would broadcast live the planned purported swearing in,” added Kaikai.

Read: Kenya’s Watershed Moment, as Raila Odinga is Set to be Inaugurated