Kenya Risks Losing Its Port to the Chinese over Increasing Debt

Thomas Jefferson once said, … “‎We must make our choice between economy and liberty or confusion and servitude…If we run into such debts, we must be taxed in our meat and drink, in our necessities and comforts, in our labor and in our amusements…if we can prevent the government from wasting the labor of the people, under the pretense of caring for them, they will be happy.” His words ring trues, decades later.

The labor of the people of Kenya is at stake. Their blood and sweat are at stake because of the careless and petty spending and looting of their gains by a government that is at the behest of greed, bribery, and corruption.

By Justice, a King gives a country stability, but those who are greedy for bribes, tear it down. These deep and reflective words are found in the Holy Bible in the book of Proverbs 29; 4 and they do reflect the relationship between the leadership of the country and how her resources are being managed by those in charge.

Globally, Kenya is ranked at number 78 out of 137 countries by World Economic Forum global competitive index. This means we are barely holding up in the league of average in terms of doing business and creating the needed environment for businesses to grow.

Kenya’s debt: Out of Control

The country’s gross public debt currently stands at Sh4.04 trillion – equivalent to 52.6 percent of GDP – according to latest data from the Treasury. This, in essence, is past the threshold of being prudent and outright risky should we hit more turbulent winds that will derail our projected economic growth.

Financial institutions such as World Bank, IMF and Kenya Institute for Public Policy Research and Analysis (Kippra) have warned Kenya that Treasury should go slow on its borrowing spree, both local and international lest we risk crossing the tipping point and start borrowing from Paul to pay peter. Unfortunately, these sound advice seem to be falling on deaf ears as the appetite for borrowing seems to be growing 100 fold every day.

Jan Mikkelsen, IMF representative to Kenya said… “The fiscal deficit needs to be reduced a little bit to make more room for the private sector and also to reduce the public debt pressure,” While debts are not necessarily bad and can actually be good for growth should they be used for primarily be used for development and not requirement expenditures. Unfortunately seems like in Kenya, we get into debt to loot, plunder, embezzle and pay inflated salaries and pay accrued high interests.

The unfortunate bit about Kenya is seeking debt to finance white elephant projects that do not translate into real, sustainable jobs that have a lasting impact on the people of Kenya and the economy at large. Most of the projects will take at least 100 years to have any significant impact on the economy.

A new report says China’s massive plan to pump hundreds of billions of dollars into ports, rail lines and other projects across Asia, Europe and Africa could pile debt problems onto smaller countries. Countries with weak leadership, poor investment plans and lack of accountability on its public resource spending and a police hold on its citizenry.

US analysts say that loans from China’s Belt and Road Initiative will significantly add to the risk of debt distress for the majority of the countries under the crosshair of the Chinese, with eight countries, including Pakistan, Montenegro, and Djibouti, according to a report published by the Center for Global Development.

“Belt and Road provide something that countries desperately want — financing for infrastructure. But when it comes to this type of lending, there can be too much of a good thing,” John Hurley, a visiting fellow at the center and co-author of the study, said in a statement

Most of the loans are being given out as part of China’s signature Belt and Road infrastructure program, which gives loans to developing nations to fund ports, railways and other initiatives across Asia, Europe, and Africa. Chinas agenda is clear, dominate key trade routes on land and sea and outdo the US in global trade influence and they have picked on countries with corrupt, weak and bribable leadership, zero accountability requirements and nil ability to repay back the loans. Here is where my worry for Kenya comes in and why this Uhuru led administration is the worst in the history of this country. 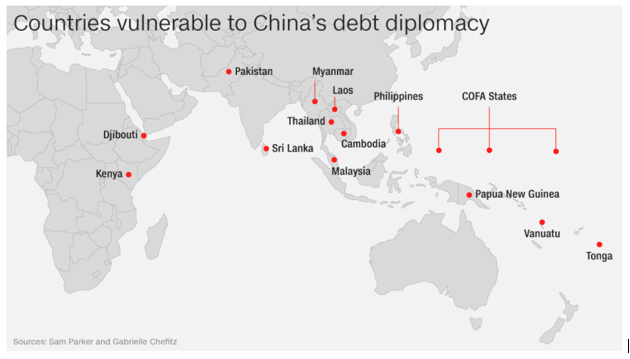 Gateway to the EA; SGR and Port of Mombasa

China’s Belt and Road Initiative (BRI) hopes to deliver trillions of dollars in infrastructure financing to Asia, Europe, and Africa. If the initiative follows Chinese practices to date for infrastructure financing, which often entail lending to sovereign borrowers, then BRI raises the risk of debt distress in some borrower countries. Kenya is one of those countries that Beijing hopes to trigger a debt crisis and hopefully take control of the SGR and the port of Mombasa.

The gateway to the larger EA is through the Port of Mombasa and the SGR in principle and whoever controls this, will control the EA countries that are landlocked and that will mean trillions in terms of business and influence. This is what Beijing is hoping for and to their advantage, our leadership is clueless to the game that they are playing and just accepting all the monies that the Chinese are throwing our way.

To make the situation worse, lack of accountability on how these deals are being done, at what interest rate, at what duration, whether the monies are a loan or a grant or both, is a mystery and we have seen the Chinese asserting their control and influencing key decisions around the movement of cargo from the port of Mombasa to the larger EA region.

Money Owed; where has it gone to?

Beijing gave Nairobi a total Sh487 billion ($4,733.94 million) in the 12 months through the end of September 2017. Within a period of just three months to September, China lent Kenya Sh122.73 billion ($119.16 million). The appetite for debt by Kenya has gotten many talking and as an analyst, am wondering, where is this money going to? Is it a loan? If so, what are the terms and conditions? If it’s a grant, how does it work?

Osayi Emokpae Lasisi in Impossible Is Stupid argues and I paraphrase, And don’t tell me debt is not a big deal. Debt will cut off your legs and laugh at you as you grovel in the dirt begging for mercy. If you don’t need it, don’t get it. If you can’t afford it, don’t get it. If you’re already in debt, get out quickly. If you think you’ll never get out, you’re right, you won’t.”

This words have never been truer to the Kenyan situation. We seem to getting into debt only for the money to be looted. Like the leadership has said, lets borrow, split and sort ourselves. Whoever takes over will deal with it. This is what is happening because we owe China 0.5T and I don’t know what that money has gone to do and at this rate, the debt distress is knocking at our door. I feel as though the 3rd Eurobond that we took was simply to pay the Chinese.

Lucas Remmerswaal in 13 Habits.com the Tale of Tortoise Buffett and Trader Hare, says that … “Debt is a four letter word and means a four word sentence – Be Prepared for Trouble.” And indeed we should be prepared for trouble from Beijing because am sure we wont be able to pay back what we owe the Chinese on time and since we are not privy to the dealings, who knows what they might spring on us?

Natalie Pace, author of  The ABCs of Money says that A Debt Problem Is, At Its Core, a Budgeting Problem.” And indeed, we have a serious budgeting issue and a spending one too. This is what is going to have the country auctioned to the Chinese because of a morally weak leadership that is being driven by greed.

In Sri Lanka, Greece and Djibouti in the Horn of Africa, Chinese investment in civilian ports has been followed by deployments or visits of People’s Liberation Army Navy vessels and in some cases announcements of longer term military contingencies. From normal business deals, China has ended up taking over these developments. Kenya is staring at a similar fate and it seems no one cares any bit.

Pakistan’s Arabian Sea port of Gwadar has faced a similar fate and this is creating more concern in the region as China solidifies its plan to flex its economic and military muscle.

What will happen to Kenya?

More on this check this out: Examining the Debt Implications of the Belt and Road Initiative from a Policy Perspective