The car industry has been evolving over the years. Since the time people of using horses and other animals, to bicycles, to trains, and to cars. Most are still being used but the car industry is the most evolved.

Currently, there are cars that can be charged by use of electricity. A young Kenyan has come up with a car that can use solar. Innovations are still coming up and manufacturers are struggling to meet the high demand.

In 2017, the sales of passenger cars and light commercial vehicles increased by 2.4 percent according to Jato Dynamics in data collected from 52 markets. This was more than 2 million vehicles sold as compared to 2016.

Passenger car sales were up by 2.3 percent to 82 million while the LCV sales went up by 4.4 percent to 4.05 million. Countries, where people bought cars in large numbers in 2017, include Russia, Argentina, and Thailand though Africa remains a huge market for luxurious cars. 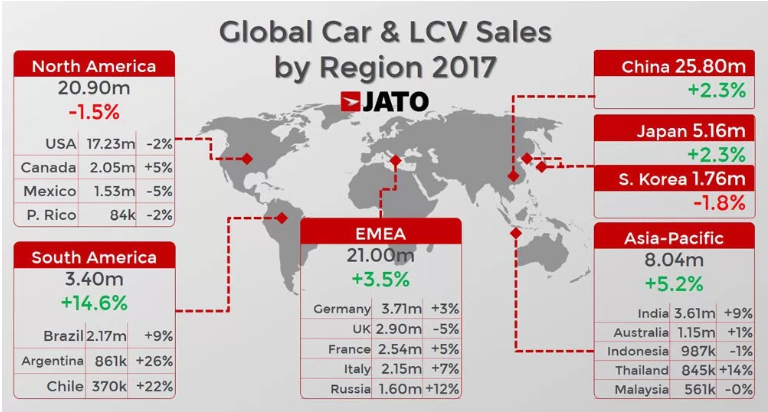 Ford accounts for 6.5 percent, Honda, and Nissan at 5.4 percent while Hyundai is at 4.7 percent. Chevrolet is at 4.4 percent, Kia at 3 percent while Renault controls 2.8 percent of the global market share.

The top 10 car manufacturers who control the global markets are: