Duty of Care and Trust: A foreign concept in Kenya as Kenyans Drop Dead One by One From Each Other’s Greed

Making the choice to exercise care and the safety of others in the line of doing business or any form of transaction is the Holy Grail of rules of engagement for humanity and the expression of Love for Humanity and Life itself.

However, greed has eroded this from the virtues that we Kenyans possess. We are indifferent and we would rather see our neighbor die as long as it makes me a profit.

Everything in Kenya seems to be going wrong and it is like our focus is on the wrong people to get solutions. We cannot hold the President accountable for everything that is going wrong.

The election of Uhuru is a reflection of who we are as a people and it is an indictment that all is not well within our society.

Accountability and responsibility start with you and I and this is something the President has been saying for the past 5 years, unfortunately, we have never understood what he means by that and hence the continual decay of our society.

Those in government, those in business, and those in the civil society have failed Kenya as a whole. The essence of what is responsible and accountable has been thrown through the window. Consumer protection no longer exists in the country and consumer watch is a farce.

A duty of care does not exist in Kenya and this has led to professional hypocrisy across the board. It is a jungle out there and death has become the norm, with daily requests for fundraising and help to solve issues that if we only were careful and needful of our neighbors’, we wouldn’t be going through.

Am sure you are asking, what is a duty of care and trust? See, that right there shows how far we have sunk as a society and how we deserve every pain we are getting until we start caring for the neighbor.

When Does a Duty of Care Exist? 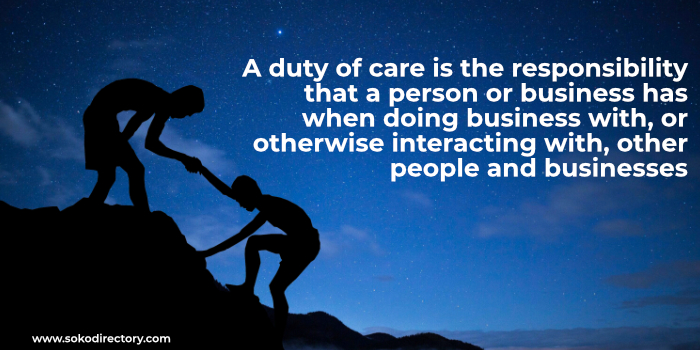 A duty of care is the responsibility that a person or business has when doing business with, or otherwise interacting with, other people and businesses.

Under tort law, a duty of care is defined as the responsibility of a person or business to act as a reasonable person would act in a similar situation.

A person who violates his duty of care by acting in a negligent or reckless matter is then liable for any harm that another person suffers as a result of his behavior. As Kenyans, we have violated this duty in so many different ways without any consequence that it has emboldened everyone to cut shortcuts, not care about the consequences to others as long as it enriches them.

We have sad and deplorable situations happening right across the country and yet no one is being held accountable or liable. This clearly indicates that there is no consumer watch and protection and that the judicial system is broken to such an extent that they think they are immune to the damage that we are going through and yet they are not.

The Law Society of Kenya has also failed Kenyans because accessing justice is expensive and they do not have a pro bono division that can handle cases on behalf of the public. 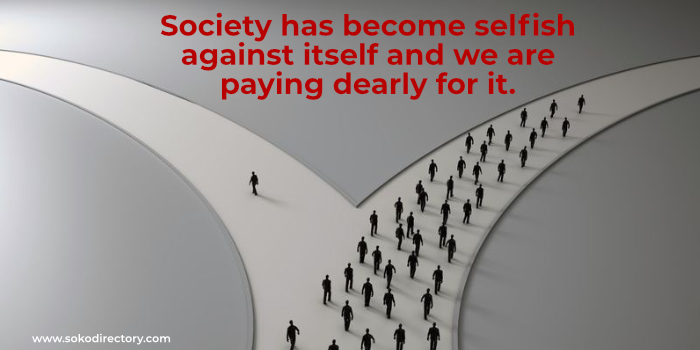 We have poisoned stuff yet those responsible are not being held accountable. We have the following;- 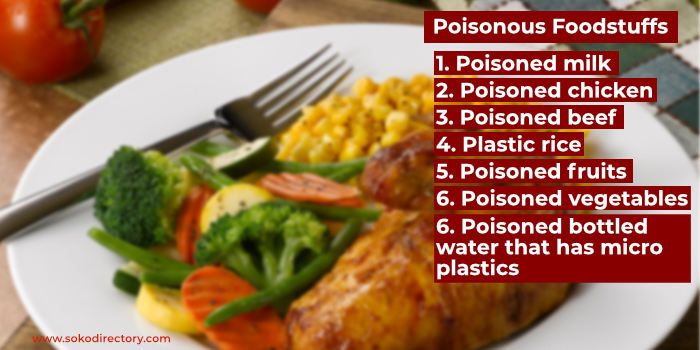 And the worst bit is, no one is held accountable. From the Department of Veterinary Services, Dairy Board, Health Inspection Units and State House, no one is bothered by what is happening.

Imagine eating fruits injected with ARVs to ripen them, or milk mixed with a poisonous component to make it last longer or meat preserved with drugs used in morgues.

We read about this in the papers yet no one is held accountable and suddenly we have more and more young people dying from lifestyle-related diseases and cancer is on the increase everywhere yet no one bothers because we either think it doesn’t affect us or we are too stupid to connect the dots.

We have had thousands of Kenyans dying because of unsafe constructed houses and poorly designed roads every year yet those responsible are not held accountable from KENHA, KURA to NCA to inspection units across the country.

We have corrupt land officials giving approvals to constructions that have dire consequences on our environment leading to bad weather hence food insecurity yet no one is held accountable.

We have those in the Energy sector overseeing the selling of adulterated fuel in the market causing serious harm to the economy of people. Yet nothing is done.

The police have consistently failed Kenyans every day when they agree to be compromised to let unroadworthy vehicles to ply on our poorly designed and poorly marked roads causing death every day, forgetting that even their relatives end up dying because of their greed.

A duty of care is an alien concept in our core economic sectors. Imagine the top officials at Treasury and KRA approving the importation of bad sugar yet no one is held accountable. We have officials at KEBS allowing the importation of fake fertilizer that has seriously put our food security at risk yet no one is held accountable.

Why are we so indifferent to our own plight? We have;- 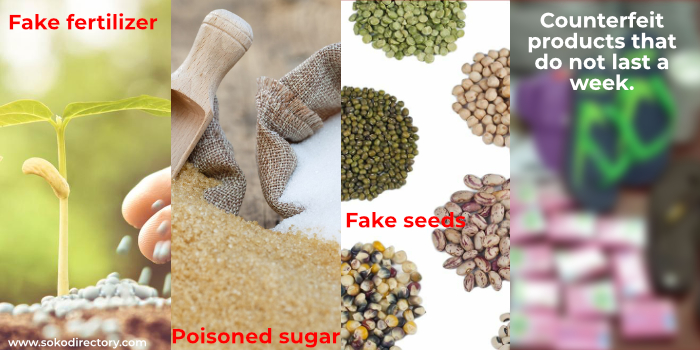 We have brands that sell us services that do not exist, and despite complaints to them, they do not care because they know nothing can happen, even if you rant online, you will rant until you get tired, yet we have paid for the services and no one is held accountable and still, our national conscience is not pricked to help us wake up and demand better.

Yet no one is held accountable. We are all in this and it’s very depressing to see our indifference as we suffer. Are we waiting for anyone to come to pull our asses out of the sand?

Negligence and the duty of care: A famous case

I have been thinking its time I went back to practice law and push for consumer protection and consumer watch before we all get cancer and die because some businessman wanted to hasten the process of banana ripening hence injected them with cancer-causing chemicals.

Ever wondered the bananas we buy on the streets of Nairobi, who inspected them? Who certified them safe for consumption, who supervised where they are grown, were they tested for safety for human consumption? Where are those responsible?

Am reminded of a case that would make brands, government officials, and businesses afraid to mess the health and safety of the public if we had an active consumer watch body.

This is a great opportunity for the LSK to do something and to help and support what Activist Okiya Omtatah has been doing. Time legal issues were handled from a different vantage point to help safeguard the public,

The case of Donoghue v Stevenson [1932] AC 562, commonly known as the Paisley Snail case, lead to the creation of the general tort of negligence. May Donoghue, a shop assistant from Scotland, became ill when she found a slug in a bottle of ginger beer that she had been drinking and ordered for her by a friend in a café. 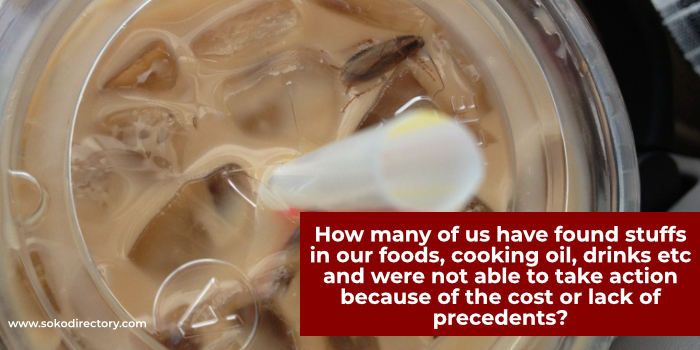 Donoghue could not sue the café owner in the contract as she had not bought the drink herself. A Glasgow lawyer suggested that Donoghue sue the maker of the ginger beer for negligence, something that had never been tried before. The lawyer argued that David Stevenson, a soft drink maker from Paisley, owed a duty of care to people who consumed his product.

The leading judgment was delivered on 26 May 1932 by Lord Atkin, who said: “…the rule that you are to love your neighbor becomes, in law, you must not injure your neighbor”.

He further said that product makers must take reasonable care to avoid acts or omissions which they can reasonably imagine would be likely to injure the consumer. Ms. Donoghue was awarded £200 in compensation, equal to about €8,400 today. More here.

Kenya Law is guided by English and its time consumer watch and safeguard became real. Cancer cases are on the rise because of this negligence by GOK officials, corrupt and greedy businesses and business people and an ignorant population.

We all owe each other a duty of care and trust because eventually we all suffer, one way or another and it’s time for us to take tort law seriously. We cannot have businesses making billions in profits yet they are scamming us daily because they know there is nothing we can do about it.

Ignorance is no defense and the public needs to be aware of its rights and how best to seek justice. We must honor the command of the Bible in Matthew 22; 34-40 where we are commanded to love our neighbors as we love.

This is the only way we can be able to address the aspects of consumer watch better or Kenya will be a graveyard in no time because we chose greed over love.

The lack of duty of care and trust should be of great concern to everyone and especially the leadership that keeps talking about making Kenya a better place but taking us backward.