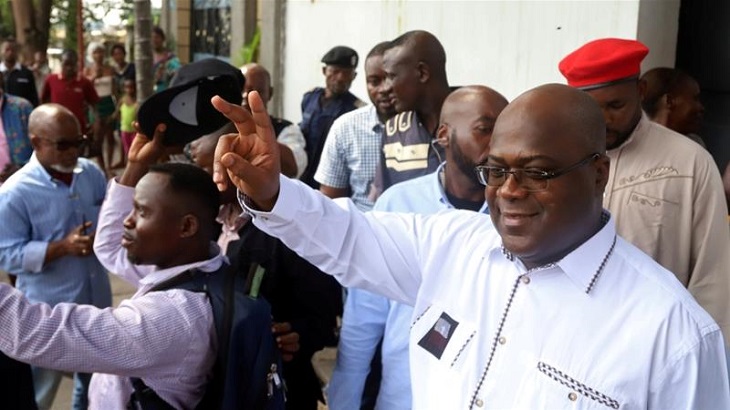 Tshisekedi’s win came as a surprise and a stage has since been set for the country’s first transfer of democratic power.

The win is likely to be contested by Martin Fayulu, another opposition leader despite vote tallies by Congo’s Catholic Church showing Fayulu as the winner according to diplomats briefed on the results.

According to Corneille Nangaa, in a press conference, the president of the election commission (CENI), Tshisekedi won by 38.57 percent of more than 18 million ballots cast.

The press conference was however held at night and seemed strategic to avoid the chaos that could erupt from reactions in the streets.

“Felix Tshisekedi Tshilombo is declared the provisionally- elected president of the Democratic Republic of Congo,” Nangaa declared as the crowd cheered on at the CENI headquarters.

Congo citizens now hope to turn onto a new page from the Kabila era that has spanned 22 years after Laurent-Desire Kabila organized a rebellion that overthrew the then leader Mobutu Sese Seko.

The outgoing president Joseph Kabila took to power in 2001 after his father, Laurent, was assassinated.

Tshisekedi’s victory, however, needs to be confirmed in the next 10 days by the constitutional court for him to be declared President of Congo.

Incumbent President Kabila was constitutionally locked out of the race but he and his party, the People’s Party for Reconstruction and Democracy, hand-picked Emmanuel Ramazani Shadary who was previously the Minister for Interior and ran as an independent candidate. Shadary, however, came in a distant third position according to the results.