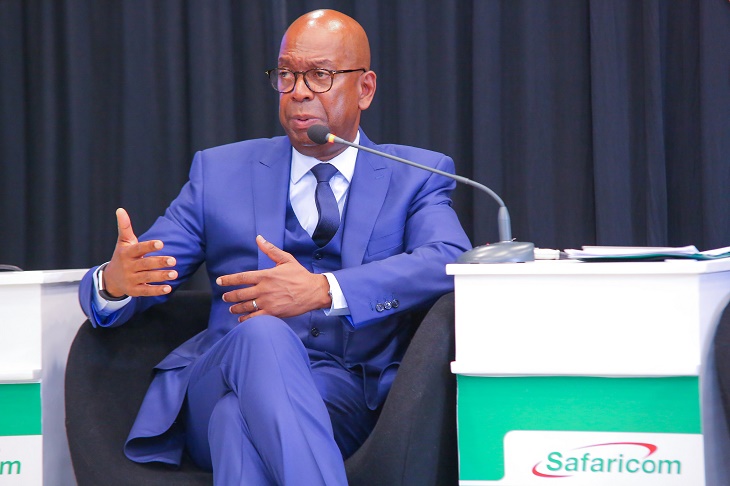 Bob Collymore, the man at the pinnacle of Safaricom PLC. His background story might sound ordinarily relatable to others, but in the business world, he is on a whole other level.

Collymore is the current Chief Executive of Safaricom, a position he took over from Michael Joseph in 2010.  His assuming the position at the time sparked some frowns from some individuals who expected less of him. In fact, few people believed he would outperform Michael Joseph, but look at Safaricom now!

Under Bob Collymore’s stewardship, the company has grown exponentially. It hasn’t been easy, and there certainly were turbulences and tempestuous storms that were threatening the telcos market in Kenya. However, instead of choosing to run with the hares, Collymore, with a fine-tooth comb chose to stand for what the company was meant to do, be successful.

Recently, the media has been running reports that Collymore is going to leave Safaricom and that the company was hunting for a new CEO, however, the company has not made any official report on the issue.

Meanwhile, let’s go back a little and count his milestones since he took over from Michael Joseph close to nine years ago.

Not long after he joined the company, Collymore introduced Safaricom 2.0; a second phase of the company after the first CEO. Safaricom 2.0 was all about change and focus; changing the company’s structure, culture, and mindsets and focusing on delivering superior customer service. But did he deliver? Of course, he did.

Joseph who came before him made some contrarian decisions that cemented Safaricom’s presence in the Kenyan telecommunication industry. However, the tech, the innovations, the abnormal profits, and the community development happened majorly under Collymore’s reign.

Nonetheless, Collymore once said in an interview that Joseph told him when he was taking over as the CEO that everything would be all right. He offered Collymore support and promised to continue doing so, which is such a courteous thing to do. Collymore took the challenge, and so began his journey at Safaricom PLC.

Not long before Collymore joined Safaricom, a series of regulatory actions had erupted and facilitated a war that reduced call rates by up to 75 percent. At this time, some people thought Safaricom had matured, and that the telcos industry was saturated.

Then came India’s Bharti Airtel which negotiated to buy Zain Africa as a move to beat Safaricom shamelessly. This was the time that Collymore joined Safaricom.

The price war scared investors of Safaricom’s shares at the Nairobi Stock Exchange – now Nairobi Securities Exchange – and they sold their shares reducing the company’s value by half the amount it had initially announce in the first initial public offering (IPO).

Having witnessed how technology innovation and massive investment in broadband internet can revolutionize mobile phone and mobile phone markets, he saw Safaricom having the potential of immense growth opportunities.

His strategical plan, Safaricom 2.0, Collymore reorganized the company’s key management and business units around crucial customers they were hoping to woo.

Although he knew that consumers like free things, he was not shaken by the price wars. In fact, Collymore increased the prices and risked it all.

Although it was a tough call that could send the company downhill, he was looking out for its future and its obligation to shareholders.

To the surprise of many, the move paid off and the company began building reserves for growth to where it is today.

In March 2010, under Michael Joseph, Safaricom recorded a profit of 20.9 billion shillings, which was at the time considered the highest a corporate could achieve in Kenya’s business environment.

However, some pessimists got some credence when Safaricom recorded a pretax profit of 18.4 billion shillings in 2011. Although the amount was a decline from the 20.9 billion pretax profit of the previous year, Collymore refused to be complacent.

To prove the critics wrong, Collymore used the decline to show just how much he was dedicated to growing the company.

He launched various services and products including the Niko Na Safaricom concerts across the country which helped drive new subscriptions, subscriptions that would start paying off in the 2012/2013 financial year.

In May 2013, Safaricom, for the first time in three years reported an increase in net profits from 12.6 billion shillings reported in 2012 to 17.5 billion shillings. The profit growth was attributed to the good performance of MPESA, text, and data.

Since then, the company’s profits have grown insanely. In May 2018, it announced the financial results for the year ended March 2018 showing a record of net profits worth 55.3 billion shillings compared to 48.4 billion shillings the year before on the back of M-Pesa and data revenues.

Safaricom subscribers had by then hit 13.5 million, with 21,000 agents scattered across the country. But in the last 8 and a half years that Collymore has been a CEO, Safaricom has passed the 30 millionth customer milestone, cementing the firm’s position as the most preferred mobile service provider in the country.

Data from a March 2019  report by Communications Authority, showed that Kenya had around 46.6 million active mobile subscriptions as at December 2018 and in terms of market share, Safaricom PLC had a 64.2 percent. This is a concise testimony as to how Safaricom has grown under Collymore’s leadership.

M-PESA, a service launched in 2007 with a simple idea; “Send Money Home” is today a banking tool for millions of Kenyans across the 47 counties. It has helped to drive financial inclusion even in rural areas fostering economic growth for all, including the women.

Data from financial inclusion report in 2019 has revealed that the proportion of Kenya’s population with access to formal financial services has reached 83 percent, up from 75 percent in 2016. This has largely been driven by mobile technology and Safaricom claiming the majority of market shares, it is one of the drivers of financial access in Kenya.

Under Bob Collymore, M-Pesa has evolved from a basic SIM card-based money transfer application into a fully-fledged financial service. It has partnered with banks to offer loans and savings as well as merchant payments services.

According to January 2019 data from the Central Bank of Kenya (CBK), Kenyans transacted nearly half the country’s GDP via mobile money platforms.

Kenyans transacted 10.92 billion shillings per day via mobile in 2018 with M-Pesa taking the lion’s share of the transactions. The mobile money transactions in 2018 were equivalent to 44 percent of Kenya’s GDP.

The financial inclusion has lifted more than 800,000 people out of poverty and made financial access way easier than it was a decade ago.

Recently, Safaricom brought to life Fuliza, an M-Pesa overdraft service enabling Kenyans to pay for goods and services when they are short of cash, and it is already a success!

Under Bob Collymore, Safaricom began laying fiber in the ground and allowing others through poles for Kenyans across the country to get connected.

By 2017, the company had invested about 30 billion shillings every year geared towards improving and expanding its network coverage, which was, by then, encompassing about 95 percent of Kenya’s population.

In his tenure, Michael Joseph took a bold decision to defy the odds and critics who were saying the 3G network had no market in Kenya. This drive was further strengthened by Collymore, who, in 2014 made a move to ensure all Kenyans were covered.

Collymore launched an aggressive strategy to make sure that every part of Kenya was covered and he invested heavily in infrastructure. The 4G network was launched in selected areas in Nairobi, and data across Kenyan towns was upgraded to 3G.

Also, Collymore ensured that more than 78 percent of Kenya’s population was covered by at least a 2G network in 2014. This further drove the company’s growth in profits to where it is today.

Currently, Safaricom is still investing in the expansion of 4G network across the country now that 5G network is still at early stages.

Collymore is obviously a huge fan of jazz, which is why in 2014, the company started the Safaricom Jazz festival. The festival celebrates jazz musicians as well as local talent far from growing the company’s brand.

The proceeds collected from Safaricom Jazz festival goes to initiatives like the Ghetto Classics, a music program that teaches music to children living in poverty, equipping them with skills and opportunities to succeed.

Some of the jazz artists that have been featured include David Sanborn, Salif Keita, Hugh Masekela, Alune Wade, Fatoumata Diawara, among others grace the stage. It has also made Kenyan acts such a spectacular phenomenon.

Safaricom was ranked the top employer in the telecommunications industry across the globe, and in Kenya, it offers the best customer service thanks to its heavy presence in social media. It also tops the rest regarding customer engagement with customers online.

In terms of CSR, there is no other corporate entity in Kenya like Safaricom. With their current slogan, Twaweza, the company is stopping at nothing in changing people’s lives for the better.

The Safaricom Foundation is in line with the Sustainable Development Goal of education for all. They grant full scholarships to learners from disadvantaged backgrounds in order to give them an opportunity to study.

Read How Safaricom Foundation is Changing Lives Through its Sponsorship Program

Also, with Bob Collymore at the helm of Safaricom, the M-Pesa Foundation has, since 2010, invested in large scale health, environmental conservation, education, and integrated water projects. The M-PESA Foundation integrates the use of mobile technology in its investments while focusing on areas of greatest need and impact.

This was brought to life in June 2017, when Safaricom announced the repositioning of its brand from telecommunications to a digital lifestyle enabler. The slogan was changed from ‘The Better Option’ to ‘Twaweza’ which means that when we come together, great things happen.

Living up to its name, Safaricom has indeed changed the lives of many and through the Nawe Kila Wakati initiative, hundreds of thousands of people across Kenya have something positive to say about how the company has lifted them.

Safaricom has greatly transitioned into one of the greatest companies Kenya could have. Although there are reports that Bob Collymore is set to leave the company in August for health reasons, the company has not yet made an official announcement regarding his leaving the company.

It would be such a shame to see the Guyanan-born British businessman leave the company. Nevertheless, we will remember him as CEO Bob, the man who made billions for Safaricom, a man who changed the lives of many, and a truly amazing human being who married a Kenyan lady.

Other than that, we wish Bob Collymore a quick recovery.