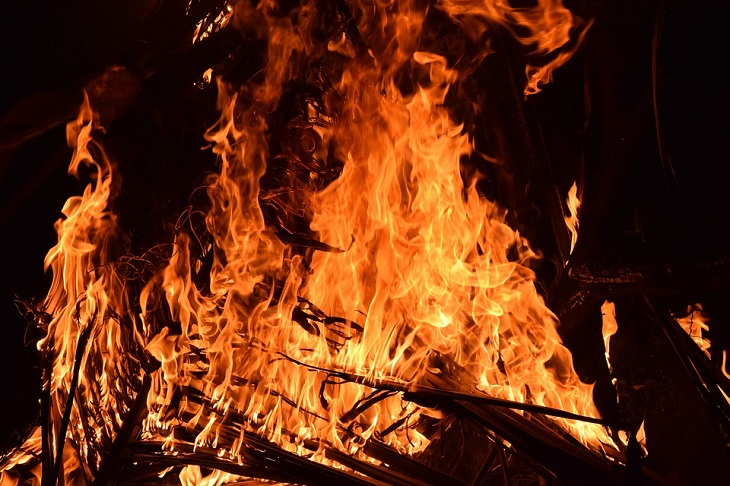 In what has become sarcastically known as ‘The Gikomba Market Annual Fire Festival’, the market has burnt down, again!

The Gikomba market which houses over 40,000 traders has burnt down again in the wee hours of 6th February 2019 for the eighth time in less than five years. Kenyans online have raised questions on why the fire keeps on recurring and no solution seems to have been arrived at over the decades despite the huge loss of lives and property which with time has accumulated to billions in losses.

The pattern in which the fire seems to be occurring in has raised eyebrows with a majority of Kenyans feeling the fires could be arson attacks targeting some traders or seeking to threaten the traders to leave the market. Gikomba market fires were reported as early as in the 1980s and have always been surrounded by speculations of land dispute given the market’s strategic position in the country’s capital city, Nairobi.

A closer look at the Gikomba Market fires reveals a worrying pattern and a sorry state of Kenyan taxpayers who are flocked right, left and center while continually enticed every 5 years as campaigns steam up with not even a single deliverable to show for the last one decade of the recurring tragedy.

On 18th March 2014, a raging fire destroyed property worth millions at the Gikomba market, near Shauri Moyo lower bridge at around 8 pm as the traders watched on despair. An eyewitness who operated a hotel where the fire started reported that the inferno was generated by an alleged explosion at Joy stores which was adjacent to his eatery.

In 2014 October 15, Gikomba caught fire for the second time in the year at around 10 pm, property worth millions was burned down to ashes as the traders watched in despair, however, a number of traders were able to rescue several of their goods.

Traders were angered at what they termed as slow response pace from the fire department.

On 23rd of January 2015, a fire broke out at 1 am and reduced clothes and shoes worth millions to ashes leaving behind a devastated lot of traders

On June 23rd, 2015, thousands of traders in Gikomba market were counting massive losses after another fierce fire razed down more than half of the market.

Shocked traders teary narrated how they had outstanding loans they had applied to boost their business yet everything had been reduced to ashes.

Gikomba traders had a rest from the fires in 2016 and hope was renewed as business began to thrive. The fires were soon forgotten only for the traders to wake up on a morning in September and find their goods burnt to ashes.

On10th September 2017 at around 7 am, another fire gutted down property worth millions, second-hand clothes and shoes were mostly affected.

On 6th October 2017, a fire broke up at around 3 am on a Friday morning and emergency efforts were heavily challenged by the market’s then inaccessible state leading a larger loss of property that should have been witnessed.

On June 28th, 2018, exactly seven months after the last fire in October, the flames raged on once more at the Kwa Mbao section and traders watched in disbelief as all their efforts to rebuild were turned to ashes.

It was the 7th time Gikomba market was burning in less than 5 years and timber and second-hand clothes went up in flames.

A dark day in the history of Gikomba fires was marked as unlike previous fires where the property was reported lost, 15 people died; some were burnt to death while others succumbed to their injuries in hospitals.

Over 70 people were seriously injured and Kenyans hoped that was the last they would hear of fires at Gikomba market but that was never to be the case.

The pain was to be renewed even before the traders could rebuild as a few months later on 7th November when the fire reoccurred and with it, property worth millions were burnt to ashes, this time around, however, there were no casualties.

The latest of the Gikomba fires happened on 6th February 2019 Wednesday night at around 10 pm where traders once again lost the property of unknown value to the raging fire. There were no reported casualties in the incident that occurred at around 10 pm when traders had already left the market.

The then Devolution Cabinet Secretary, Mwangi Kiunjuri linked the Gikomba market fires to arson vowing stern action against those who would be found involved.

The CS confirmed suspicions of the Gikomba market fires as a case of arson.

“From the initial reports that we are getting, we are saddened that they appear to point at foul play. The government has set in motion investigations into the cause of this fire to fully establish what caused it,” the minister was quoted while addressing a newsroom after the October 6 fire in 2017.

“Let it be known that stern action will be taken on the culprits should the investigations establish foul play,” Kiunjuri added.

As the traders continue in a fighting spirit versus what remains to be ghosts that are well connected, mistrust has been seen to thrive as efforts to rebuild the market have on a number of occasions been rejected.

Directives to rebuild the market remain vague and orders to probe the cause of the fire are dropped before they can see the light of day. High sounding statements have been the norm every time fire ranges in the Gikomba market while a number of politicians have grabbed the trader’s tragedy to become popular with them and secure votes.

President Uhuru Kenyatta has previously ordered probes into the Gikomba fire but whether his orders have been taken seriously or not is yet to be seen.

“The incident has displaced many traders from all over the country and investigations should be launched to find the culprits and action be taken against them,” President Kenyatta said after the October 7, 2017, fire.

“The Government will stand with the affected traders by building the market to enable them to continue with their business,” the President promised yet the Gikomba traders are yet to see the promise actualized more than a year later.

The Nairobi Governor Mike Sonko was seen as the traders hope to end the tragic fires and they came out in large numbers to send him to the capital’s highest office but even Sonko seems clueless on what could be ailing the Gikomba market a decade long.