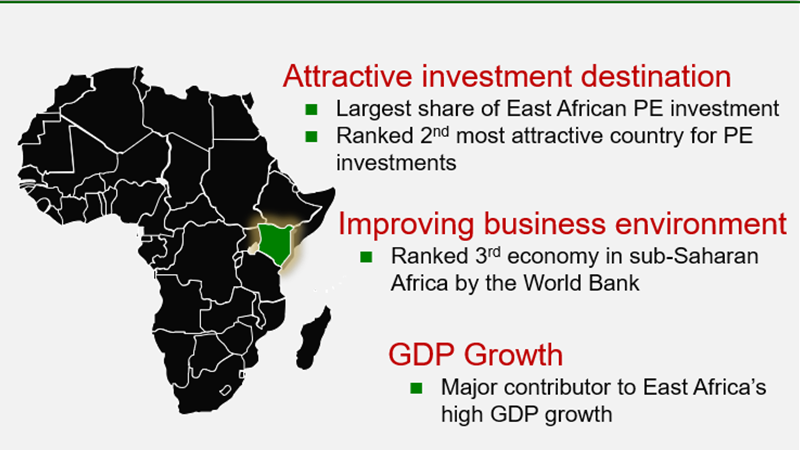 Kenya was ranked fifth in Africa’s most attractive investment destinations in 2019 according to a new study by South Africa’s Rand Merchant Bank (RMB).

The RMB Investment Attractiveness index ranked Kenya the best in East Africa due to the political serenity experienced after the 2017 election and the expected GDP growth of above 5 percent.

Rwanda was ranked second in East Africa after Kenya and was also rated the fastest growing economies due to its government’s massive support and channeling of funds to the domestic industries while FDI has increased significantly over the past decade.

Tanzania was placed third in East Africa due to what the report cited as “government tax breaks, development of special economic zones, investment in public infrastructure and growth in the services sector as incentives for foreign investors”. The report also noted that the economy’s size was almost overtaking Kenya’s with an expected growth of above 6.5 percent over the next five years.

South Sudan has deteriorated the most, after being ranked the least attractive investment destination due to the ongoing civil war which has prevented the economy from developing. Opposing parties have signed a peace deal granting rebels key positions in a transitional government in the latest bid to end the almost-five-yearlong conflict. If this deal is successful, it is expected that there will be an improvement in its rankings.

According to the report, Africa’s overall operating environment has improved only marginally since the last assessment done in 2017. However, access to financing, corruption, inadequate infrastructure, and weak governance remain the most problematic factors for doing business in Africa.

The Investment Attractiveness index also compared the quality of infrastructure in all the 54 African countries in which Kenya was ranked position 15 with a score of 4.1 out of a possible 10 points.

Envisioning a ready solution to inconsistent power supplies due to the lack of infrastructure, M-KOPA founder Nick Hughes designed a system that has now become. This has put Kenya on the map as the leading East African country in realizing its potential for soft infrastructural innovation.

Seychelles dominated the rankings with its high-quality tourism infrastructure and strong ICT capabilities. In fact, the island economy was placed second in Africa on the International Telecommunication Union’s (ITU) ICT Development Index and 90th on its scale of 176 countries worldwide.

The report highlighted that the lack of efficient infrastructure is one of the major challenges to doing business on the continent. Nonetheless, its development is the key to unlocking Africa’s growth potential.

The African Development Bank’s (AfDB) most recent estimation of infrastructure needs is between US$130bn and US$170bn annually, but the continent’s available capital is insufficient to achieve this.