The five “water towers” are Mt Kenya, Aberdare Range, Mau Complex forests, Cherangani Hills and Mt Elgon. Currently, there are eighty-eight (88) Water Towers in the Country. Out of these, eighteen (18) are gazetted while 70 are non-gazetted.

Among the gazetted Water Towers, there are five (5) major ones that are key to the Country's socio-economic development.

Kenya is a country of contradictions, and this article has my anger shooting off the roof. How can we be talking of hunger and drought in a country where the latest LC 300 worth KES 25M is the norm on our roads?

A country where Every region has its own government. A government where every Kenyan has taken part in and proclaimed that it’s God and not witchcraft, so what the hell is happening?

Kenya is enduring its worst drought in 40 years, according to the government and the UN. More than four million people are “food insecure,” and 4.2 million can’t get enough water to drink. Reading this is not only sickening BUT an indictment that all our leaders, collectively have failed. As a beacon of the region, how did we get here?

An estimated 4.2 million people in the Arid and Semi-Arid Lands (ASAL) of Kenya are severely food insecure following three consecutive poor rainy seasons that have hampered crop production. What is shocking is that we have a fully funded Ministry of Devolution and ASAL to focus on such and ensure that we do not get here but unfortunately, we are here. Am tempted to ask, what happened to the Galana Irrigation Scheme? We pumped in over 10B in the project. Oh wait, corruption happened.

Four back-to-back below-average rainy seasons in the Arid and Semi-Arid Lands (ASAL) region of Kenya have led to the longest drought in at least 40 years, leaving 4.2 million people in need of humanitarian assistance according to the revised Kenya Drought Flash Appeal. This includes 4.1 million people experiencing high acute food insecurity (IPC Phase 3 or worse) between March and June 2022, according to the Integrated Phase Classification (IPC) update published in June. At least 1.5 million livestock had already died as a result of the drought by February 2022, according to the Short Rains Assessment, and this figure is expected to increase in the months ahead (https://reliefweb.int/report/kenya/kenya-drought-response-dashboard-may-2022#:~:text=Under%20the%20Kenya%20Drought%20Flash,including%20534%2C000%20in%202022%20alone.)

The drought situation continues to worsen in twenty (20) of the 23 ASAL counties. This is attributed to the failure of four consecutive seasons with the forecast for OND predicting the likelihood of the fifth season underperforming. The number of people in need of humanitarian assistance is projected to increase to 4.35Million by October 2022. This is not the full picture because even the stable counties and especially Western and North Rift are doing badly and our food security is now a national disaster YET no one is talking about it.

Ten (10) counties namely; Isiolo, Mandera, Samburu, Kajiado, Tharaka Nithi, Turkana, Wajir, Laikipia, Tana River, and Marsabit are under Alarm drought phase while Ten (10) counties including Embu, Garissa, Kitui, Makueni, Meru, Narok, Nyeri, Taita Taveta, Kwale, and Kilifi are in Alert drought phase. The remaining three (3) counties including Baringo, West Pokot, and Lamu are in the Normal drought phase. The worsening household food security situation has resulted in acute malnutrition rates noted across the counties with 942,000 cases of children aged 6-59 months acutely malnourished and 134,000 cases of pregnant or lactating women acutely malnourished in need of treatment. But do we care for numbers or truth? What are the county governments doing? What solutions do we have or our focus is electing corrupt leaders and punishing others when innocent Kenyans die every day over issues that are so preventable?

Do we have a renewable contract with God that it must rain every season in Kenya for us to be food secure? 60 years since independence and we are still suffering from the same issues that afflicted our ancestors 60 years ago. Clearly, the Colonialists were not the problem after all. We are our own worst enemies.

I will not belabor the issues that we are facing instead, I will try and focus on what we need to do as a country to come out of the mess we are in and save innocent lives in the process. 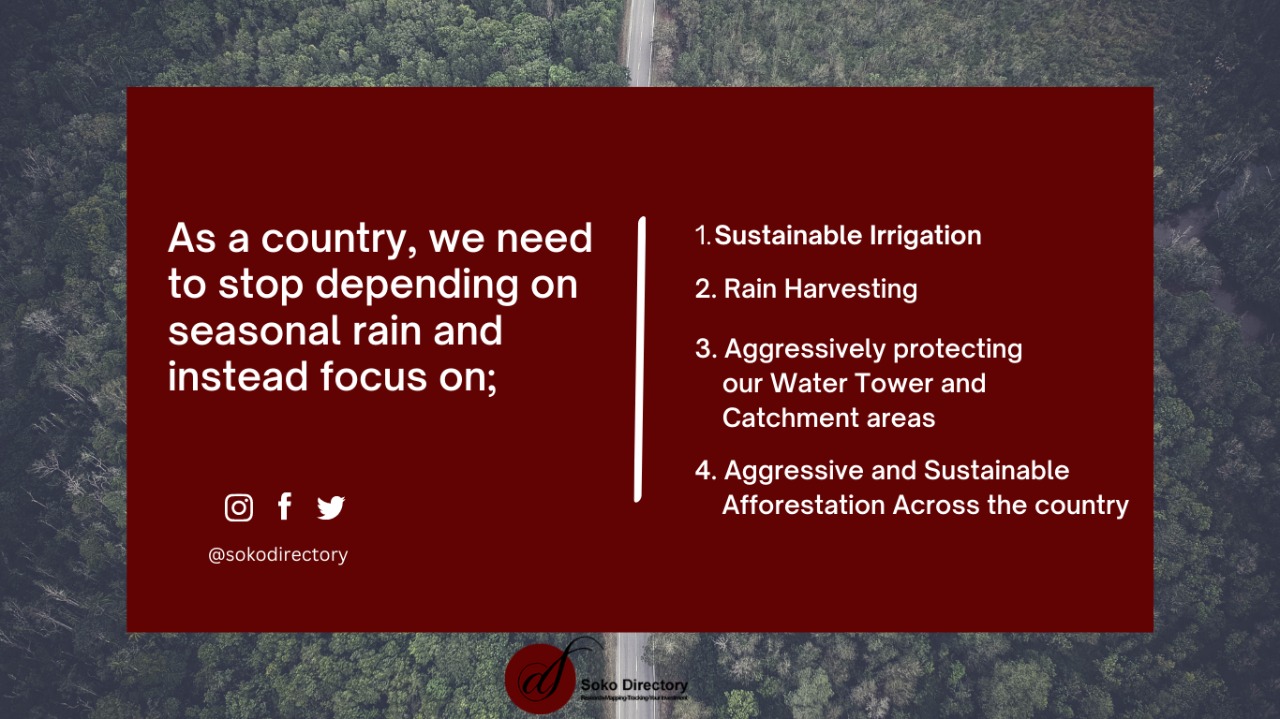 As a country, we need to stop depending on seasonal rain and instead focus on;

Sustainable irrigation refers to any activity or practice relating to irrigation such that it helps to satisfy the welfare and survival needs of the present without compromising the needs of future generations. It could be irrigation of agricultural areas, ornamentals, and landscapes. This entails the installation of engineering facilities for the abstraction of water at the source, conveyance, and distribution to the target crop area and water application technologies. In addition, water evacuation facilities are also provided in the name of the field, collector, and main drains for flood and furrow irrigation systems. This is complemented by ancillary facilities such as farm roads, dykes (areas prone to flooding), and farm buildings (offices and stores) among others. For more details; https://www.irrigation.go.ke/sustainable-irrigation-development/

This is what we need to develop and ensure every county is practicing it and implementing it without delay.

Rainwater harvesting (RWH) is the most traditional and sustainable method, which could be easily used for potable and nonportable purposes both in residential and commercial buildings. This could reduce the pressure on processed supply water which enhances green living. We need to ensure that the law supports this and is enforceable.

The five “water towers” are Mt Kenya, Aberdare Range, Mau Complex forests, Cherangani Hills and Mt Elgon. Currently, there are eighty-eight (88) Water Towers in the Country. Out of these, eighteen (18) are gazetted while 70 are non-gazetted. Among the gazetted Water Towers, there are five (5) major ones that are key to the Country’s socio-economic development. We need to aggressively protect these areas with laws that criminalize any encroachments and the punishment is the capital sentence. We must punish with death anyone who messes with our environment and puts at risk the lives of our future generations.

What we need to ensure through law and especially the Constitution is that every County must at least have a minimum of 45% of its size under forest cover. This way, we will change our Climate change conversations, drastically improve our carbon footprint and eternally protect our water catchment areas.

My solution to the hunger disasters we are facing sounds easy and doable, right? Well, we lack the needed political will to push such changes through and it is like we have the worst, most greedy, selfish, and indifferent leaders on the planet.

It is my prayer that for every lost innocent life, may their blood call out for Justice from every elected leader for failing to do the right thing. May We pay for letting innocent lives be wasted.

Related Content: Fighting The Hidden Hunger That Bites From Within